From Jesus Walks to Is King: Kanye’s Revelat...

The Risk of Inhaling: What You..

From Jesus Walks to Is King: Kanye’s Revelation

On Saturday, September 28, Kanye West visited Chicago to let some of his hometown fans get a first listen to his unreleased album, Jesus Is King. Chicago was his second stop, following Detroit and preceding New York City, for his exclusive listening parties. Fans had a short amount of time to cop tickets for this intimate, no-phones-allowed Kanye West experience.

That is exactly what people came for — a “Kanye West Experience” — as the marquee read. The album was never performed. West played and rapped over it off his Macbook. However, fans did not seem to care since they were all but starving for a taste of his long-awaited album. That night he never once touched the stage. As the audience waited around for well over an hour after the doors opened at 9 p.m., they had nothing better to do than grab drinks and stare at the blank projector screen. Meanwhile, West stopped by Chance the Rapper’s show at the United Center. After performing “Ultralight Beam” together, he announced, “Jesus is King,” and immediately left. Cheers and screams erupted in waves back at the Auditorium Theatre and people started moving and pushing towards the right of the stage. West, his wife, Kim Kardashian West, and their three children emerged from the stage left balcony.

Jesus Is King: The Kanye West Experience at the Auditorium Theatre in Chicago. September 28. 🎥 @__bu

The night was split into three sections. Before he played the album, he showed a short documentary about the building of his domes: a space designed for his choir performances. The architecture design will also be used for West’s affordable housing project he is planning. Next was the anticipated album release. Last was his film produced on Imax and with filmmaker Nick Knight about his Sunday Service choir. Already trademarked, West takes every Sunday to travel around the U.S. and invites fans to join him and his choir, “singing gospel covers of various songs both by West and by others,” according to Vox.

There was no narration or dialogue; just his choir singing along scenes that alternate between close-up shots of nature to faces of the singers in the choir inside the dome. There was no obvious plot or story arc. Half of the screen was blacked out and showed a circular view, as if the audience put their own eyes up to a camera’s viewfinder. A couple of scattered men stood up throughout the crowd, dancing and throwing their hands up to the sky, as if in church. 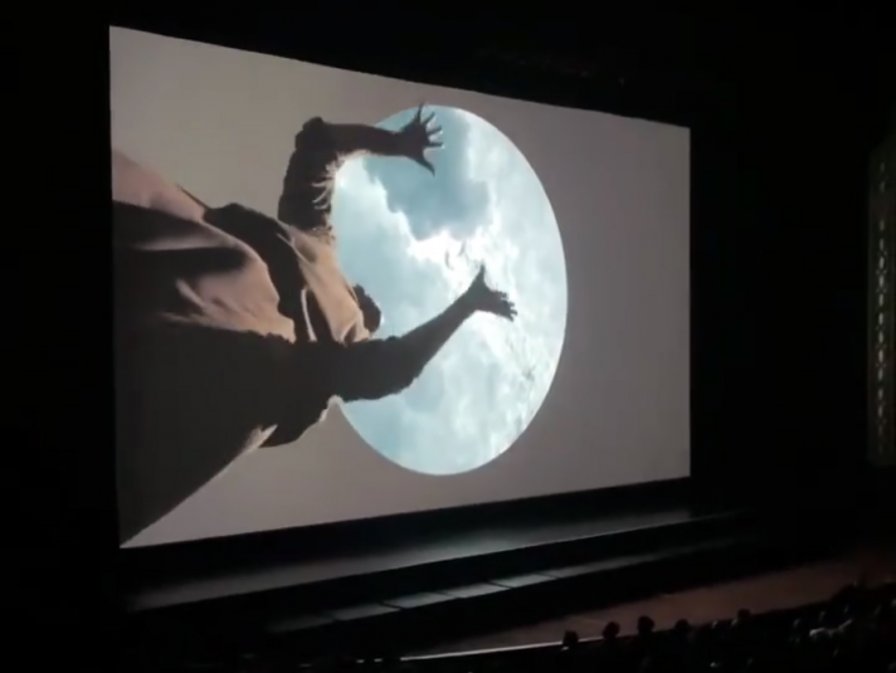 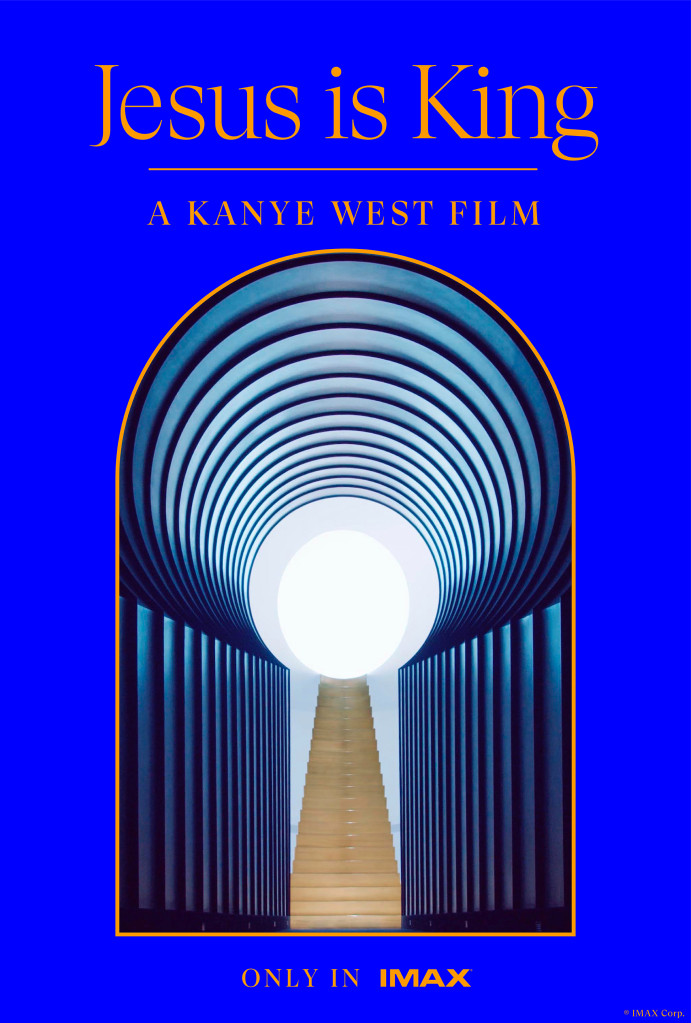 Jesus is King is still yet to be dropped and for a reason; it did not sound finished. The projector and sound system also had a few malfunctions throughout the night. But fans were patient and grateful for this chance at a first look at his new project. Jumping onto the seats and pushing through the aisles, the audience flocked to get as close as they possibly could to West. He instructed the security to let people in the upper balcony to be let down to the main rows. Even with this undivided attention there were moments that lacked excitement. Certain songs throughout the album were hard to latch onto — fans just stood with eyes wide of admiration, not really sure what else to do. It was like a child digging into their Christmas stocking, eager to eat the candy even if it wasn’t their favorite flavor.

There were highlights. There are still, “trap drums, ambient flourishes, prominent samples, and verses from the Clipse,” — very much Kanye, according to Rolling Stone, just stripped down. At one point West played a track back, telling fans to sing louder, because it was made for the size of a soccer stadium. The greatest cheer arose at the end, not only because it was the end of the album, but an outro by Kenny G, world renowned saxophonist.

Before playing the album, West asked for a prayer to thank God for his life and his family. A handful of people reacted with “yes sir”s, but this certainly was no Sunday Service. He came here for a gathering and many people, not knowing what to expect, anticipated a show. But West said himself that he is done with performing. Andrew Barber of Fake Shore Drive tweeted, “Kanye also announced that he is no longer making secular music. Only Gospel from here on out.” Gospel music’s main focus surrounds the teaching of Christ.

West told the crowd the death of his mother affected him in ways he was not aware of until recently. With the auditorium still enough to hear a pin drop, only Kanye’s echoes filling the room, he leaned on the table and bent into the mic. Carefully clenching every word in his mouth, West claimed that the devil had taken him over — especially his mind — to the point of being mentally institutionalized. As his daughter, North, tugged on the sleeve of his jacket, he continued to explain this was why his past few albums were so sexualized and filled with sin.

Kanye said he is done making secular music, but his fans are skeptical. In a recent YouTube video, Anthony Fantano, a music critic, said, “It is pretty essential for Kanye to always be changing, always be evolving, always be trying to find a new way forward.” Although this is a key component any successful artist needs to stay in the game, Kanye is well known for arguably manic transformations. Fantano said if he only does Christian rap from now on, it could be the end of his career. Of course, this is not the first time West has made Christian rap.

On his debut album The College Dropout, “Jesus Walks” was one of the first songs of its kind. “They say you can rap about anything except for Jesus, that means guns, sex, lies, videotape, but if I talk about God my record won’t get played, huh?” Jesus Walks reached number 11 on the Billboard 100 in 2004. But West was not the first hip hop artist to integrate gospel — it was MC Hammer. His 1990 LP, Please Hammer Don’t Hurt ‘Em was the first time Christian rap went mainstream. From there, hip hop icons like Tupac and Bone Thugs-N-Harmony followed with religious, spiritual and even themes of consciousness in their music.

Spiritual messages may have become part of Tupac’s identity, but it’s hard to really place Kanye. He is trying to construct a whole new identity as almost a spiritual leader through his Sunday Services and new album, Jesus is King. Before, Kanye’s pendulum swung between songs like the holy “Ultralight Beam” to the abrasive “Father Stretch My Hands Pt. 1.” As the first two songs off The Life of Pablo, his seventh studio album, he goes from being backed by a beautiful choir singing about a god dream to spitting bars about getting stains on his shirt from a model’s anal bleaching. Even behind these audacious lyrics, however; there is a sample of a South Side Chicago pastor. West’s albums often seem to be a conglomerate of religious and secular themes, which is one of the many reasons Kanye is loved and hated by so many.

On My Beautiful Dark Twisted Fantasy, West’s fifth studio album, he also integrates religious undertones into his lyrics. From “Devil In A New Dress,” “We love Jesus but you done learned a lot from Satan,” to “Hell Of A Life”’s, “No more drugs for me, pussy and religion is all I need.” The cover art is a depiction of West with a white nude angel on top of his lap — which eventually got censored. Throughout his discography, some might say it is easy to track his struggle with religion. But he integrates it so seamlessly with other human conditions and struggles that it almost appears natural and effortless. As stated earlier, hip hop and rap has its history with gospel, but no one else really integrates the symbolism of the Bible quite like West does.

“It’s safe to say Kanye West played a substantial part in spreading the religious movement throughout hip-hop culture,” said Kairi Coe on XXL magazine. Considering The Life Of Pablo, “a gospel album with a whole lot of cursing on it.”

He claims his sinful themes are going to change. A recent Rolling Stone article confirms that the new album actually contains no curse words. This would be the first West album without at least one song with expletives. “New Body,” a song initially leaked off of Yandhi, the initial album that was supposed to drop in 2018, was not scrapped but instead was reworked to fit a more religious outlook. Before, “New Body” was a song about plastic surgery. Now, it is very spiritual, “You’ve been born again in your new body.”

“He’s changed the genre’s DNA with every album, to the point where each has inspired a generation of direct offspring, and now everywhere he looks, he sees mirrors. The message seems clear: He’s through creating new Kanyes, at least for now,” writer Jayson Greene said in his Pitchfork 2016 album review. Maybe now in 2019, West has found himself in his final Kanye form with Jesus is King. Probably not.

Kanye West gets a lot of backlash, even from devoted fans — but this is unique. West is a special case because he is a black male, and the first singular black male hip hop artist to publically be vulnerable, expose his faults (whether he wanted to or not), make mistakes and be transparent about not only his mental health but also his creative artistic process. And through it all, he still keeps his legacy.

“A Kanye album is like a working document. You don’t hear the final version of it until it is available for purchase. That’s just the way it works. Every producer knows that, every friend knows that. That’s just the way it is. People don’t really see editing as an art,” Myles Tanzer of the Fader said. Who knows when Jesus Is King will be released in its full form? Even after it is released, it very likely will be reworked. That’s the magic that is Kanye West.