Being Positive About Death in College

A Home Away from Home: Hyde Pa..

Being Positive About Death in College 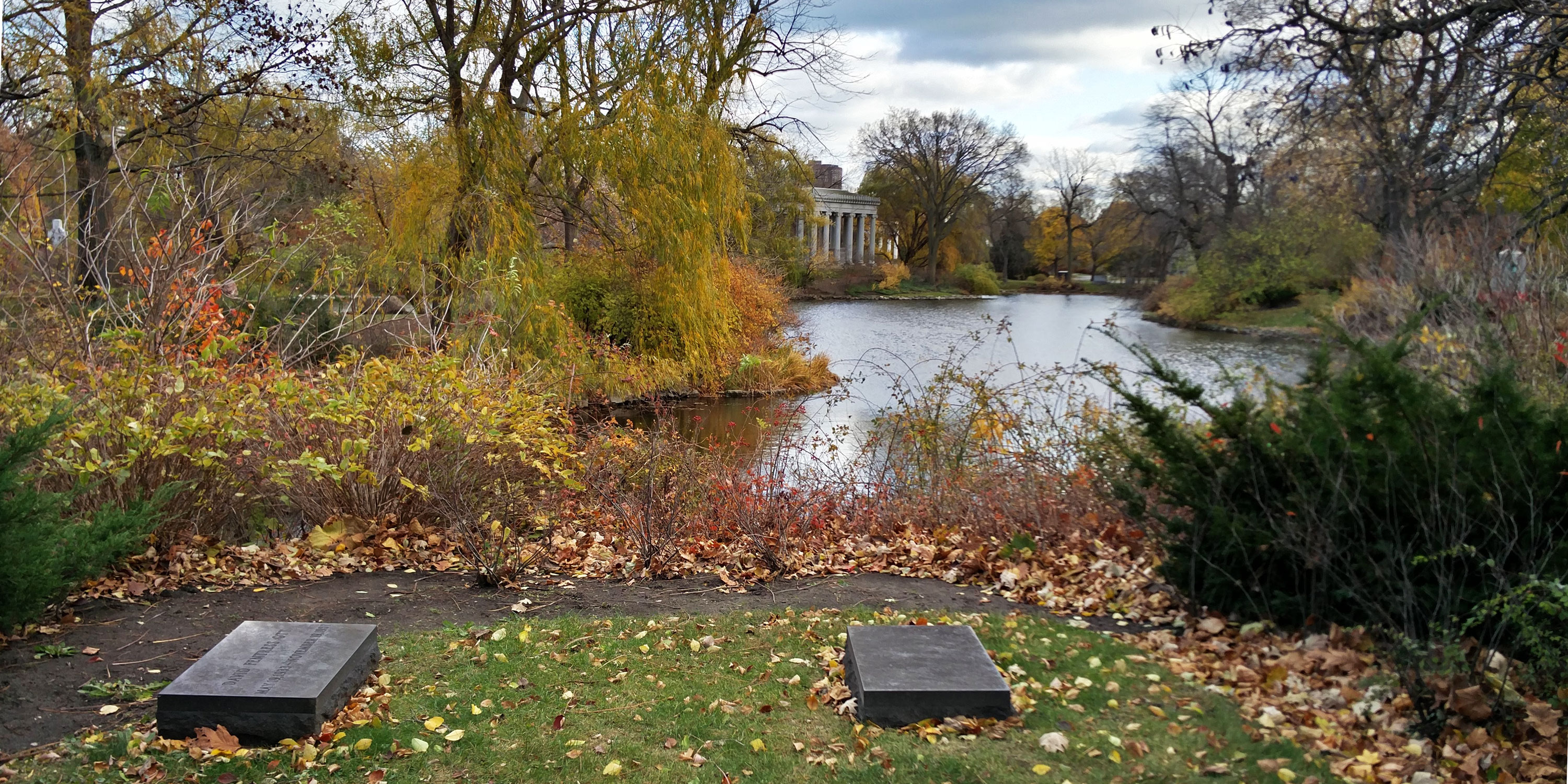 Over the course of human existence, one inevitable fate unites the prince to the pauper, the hero to the villain, and the saint to the most prolific sinner: death.

However, despite death’s inevitable and uniting status, my research for this article found that most DePaul students do not initiate conversations or pursue knowledge on many topics related to death. For many, this naivete about the inevitable was encouraged by America’s view of death as a societal taboo.

For my research, I interviewed three DePaul students at random to give their honest and personal thoughts on and knowledge of death. I chose this method in favor of pre-planned interviews, which ran the risk of tempting participants to do research of their own beforehand and lose a desired personal angle.

Specifically, the students I approached were asked to list what they believed to be the processes between a person’s death and burial, in addition to their views on whether death education should be more common in our society and how positively they viewed the subject.

Elyse Flannery, a senior at DePaul, was one of the students interviewed.

“People push it off,” Flannery said regarding conversations over death and its perceived level of positivity. “You always push it off, and you’re never ready.”

Flannery pointed out that the avoidant, negative angle Americans take towards death is not a universal approach to the subject.

“I get it’s death, but not in every culture is death so bad,” Flannery said. “In some cultures there’s reincarnation. I don’t think that it’s too scary.”

In religions such as Hinduism, reincarnation takes death from being a finite end into a rebirth and continuation of life in which past “good” deeds are rewarded and “bad” deeds are punished.

In addition to reincarnation, Flannery also referenced 20th century French literature and its pessimistic themes. Flannery said these writings frequently viewed life as a pointless game that you were thrown into and death as an unavoidable and welcomed truth.

For example, Jean-Paul Sartre’s essay “Being and Nothingness” describes life as a “useless passion.” The essay is part of the larger movement of French existentialism. Influenced by a reaction to the horrific memories of WWII in France, existentialism reflected a country that had become desensitized to death — a type of desensitization not experienced in America.

“I think it’s good to try to accept that loss as a part of your life,” Flannery said about American death sensitivity. “Because then you won’t be so traumatized when you do lose the person. Because, it’s really sad to hear, but sometimes loss cripples people.”

Alex Radocha, a sophomore at DePaul, also gave his input on why the conversation of death is uncommon in America.

“No one is planning to die unless they’re really old,” Alex Radocha said. “I’ll just see a movie about some grandpa dying. But, as kids, you don’t think about it until they’re that old.”

Flannery pointed out that Radocha’s stereotype about the common age of death is especially true for college students.

“We, as university students, we’re at a ripe age, sadly, where our grandparents pass a lot,” Flannery said.

Apart from emotional tolls, Flannery also said that the death of a grandparent may affect college students “financially and economically,” as funeral preparations and plans often fall on the younger generations of the family to carry out and sort through.

Despite the looming threat of this responsibility, I found that those I interviewed were unaware of the steps and costs they may find themselves having to go through and pay following the death of a loved one.

I asked Flannery and Radocha as well as Megan Levonyak, a recent DePaul graduate, to list the steps that one can expect to occur from a loved one’s initial death to their burial. For the sake of simplicity, I asked the three to assume that the cause of death was natural.

Their answers are illustrated in the infographics below (these are the students’ assumptions of the processes, not facts): 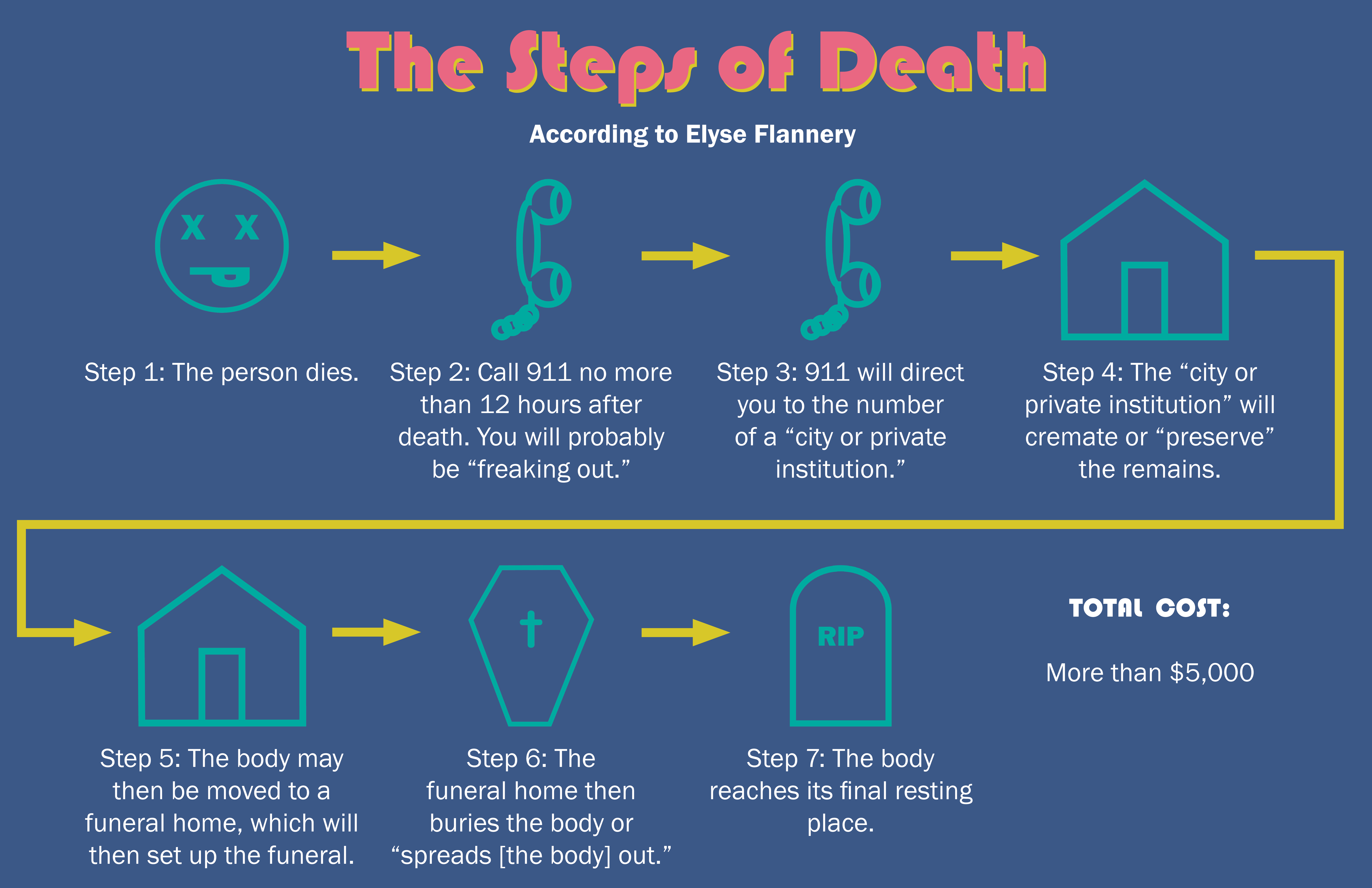 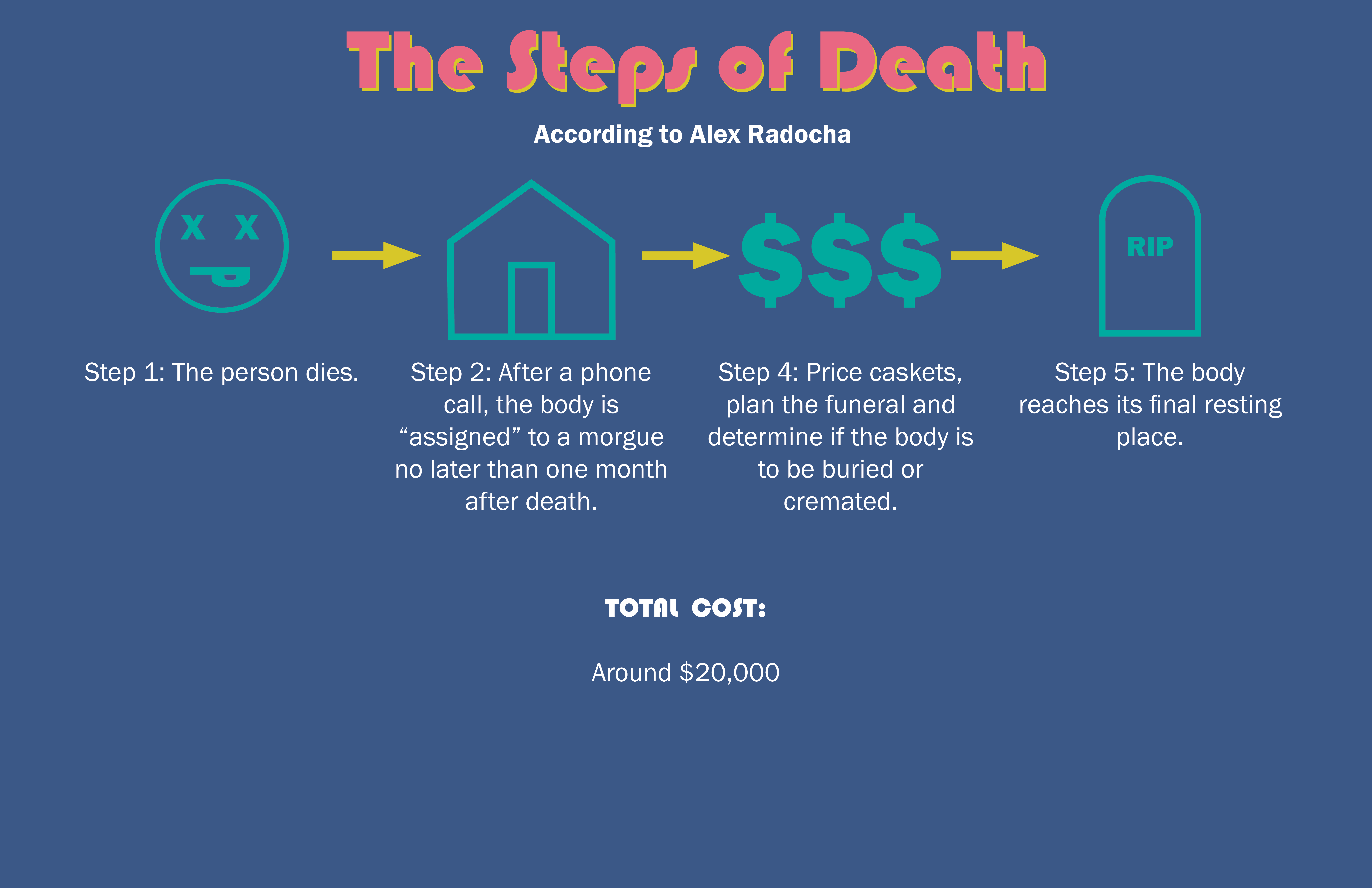 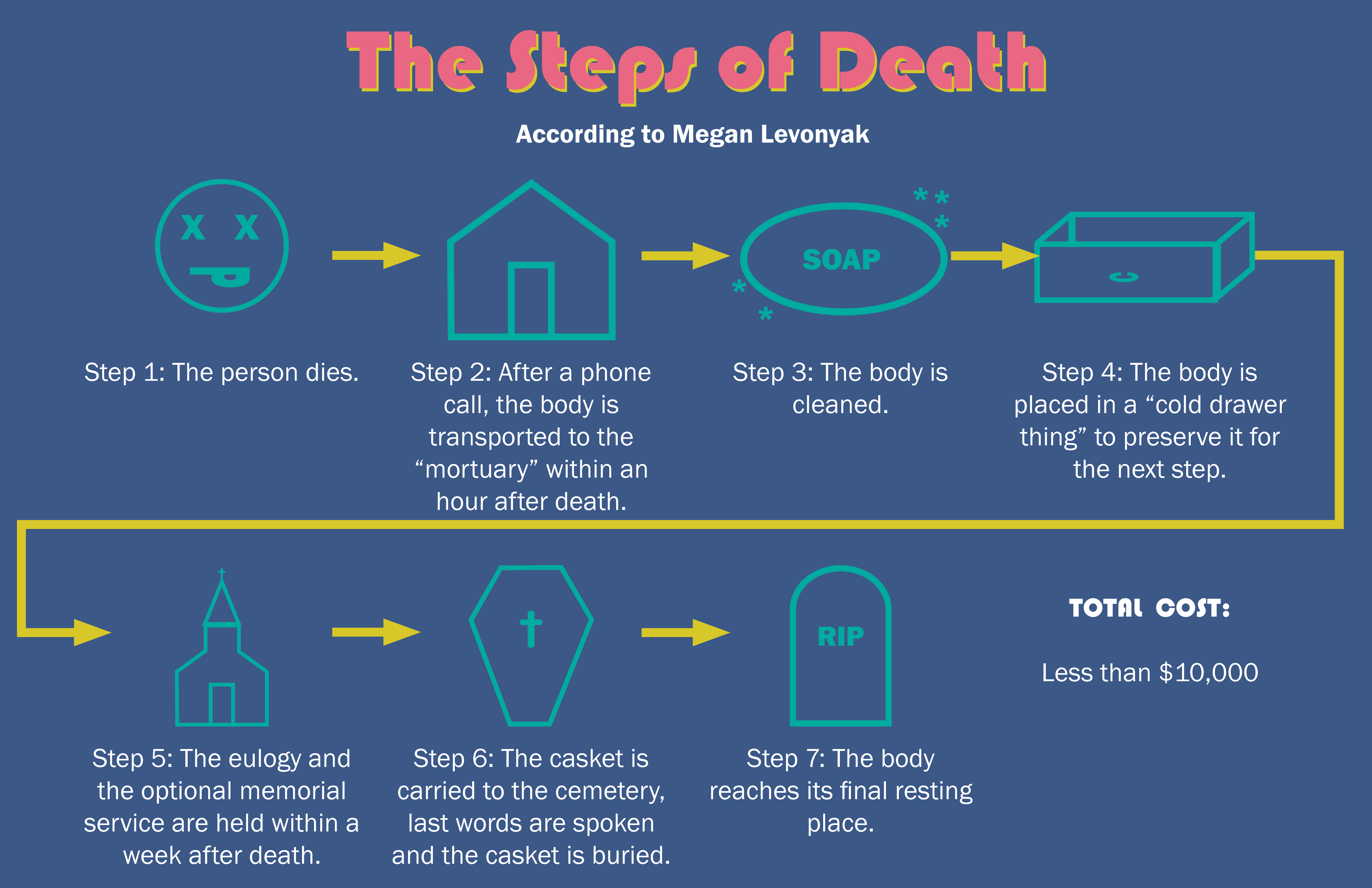 Though I did not prompt them to do so, the answers of those given all assumed an at-home death in which no prior preparations had been made in terms of funeral arrangements. Additional analysis revealed a varied mix of ideas of what the body and family go through between the initial death and eventual burial.

In all three cases, the move to one of these locations occurs after a phone call. The interviewees suggested that this call must be made no later than one hour to one whole month after death. Following the call and location change, they said a variety of next steps may occur before the body is to be buried. The total cost, per the students: anywhere from just over $5,000 to $20,000.

For answers coming from a generation that, as Flannery said, may find themselves “financially and economically” responsible for carrying out the death to burial process for their grandparents, the diverse answers raise questions.

First, what are the actual steps and costs in the death to burial process? Second, where can college students go to get accurate information on the subject to become educated on death?

To start with the first question, below is an infographic compiled from information found from the San Tan Funeral Home and Advanced Planning Center in Queen Creek, Arizona, detailing a realistic list of steps one can expect to take following the death of a loved one: 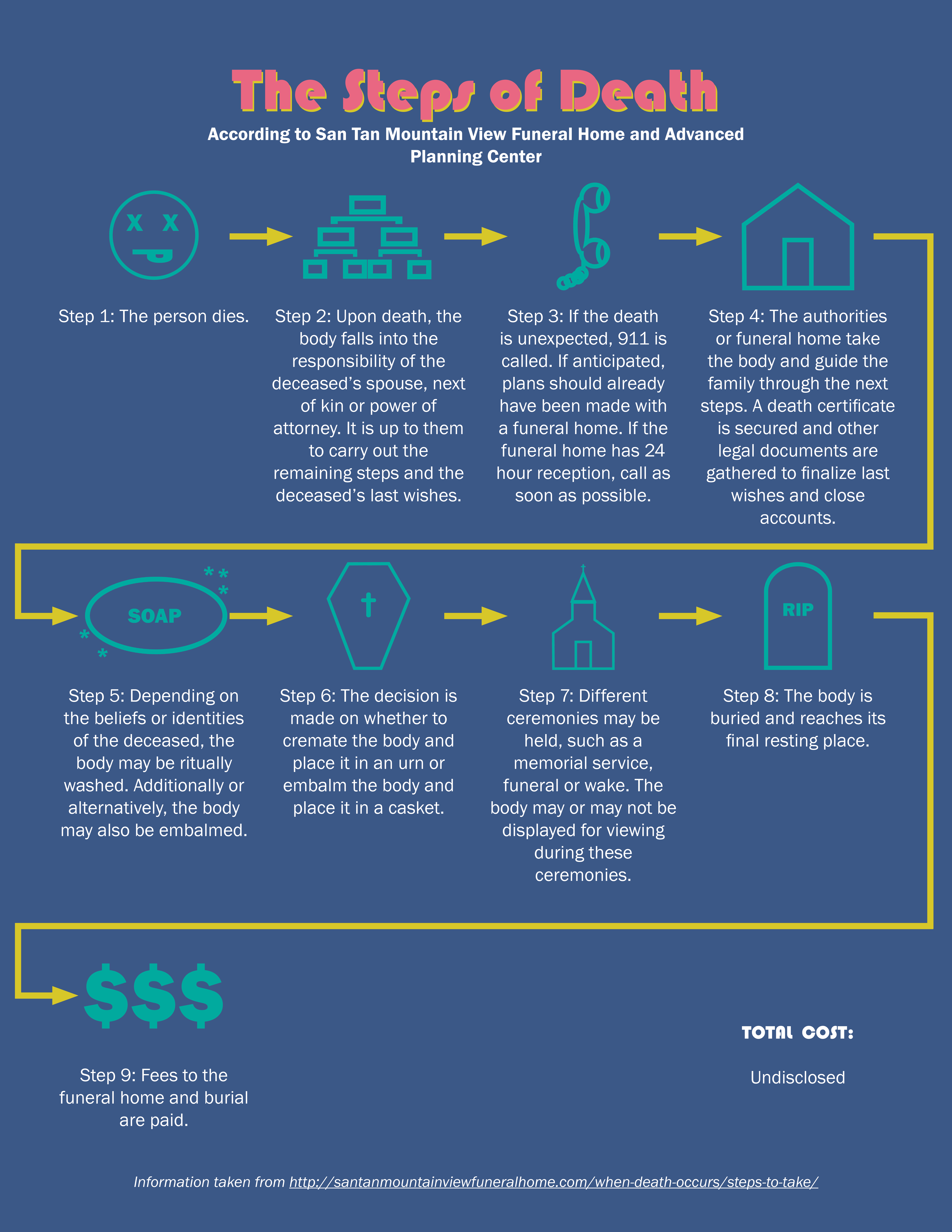 San Tan’s website did not provide a total cost estimate, instead prompting potential clients to contact them individually for a price. Without having to go through the process of having to personally contact them or similar nontransparent funeral homes to chat about prices and options, where can someone find accurate information regarding cost estimates?

Regarding prices, Caitlin Doughty, a mortician living in Los Angeles, California, makes a transparent note of the issue of money in a 2017 article published in The New Yorker titled “What Do We Do With Our Dead?” In the article, Doughty says that the typical cost of a traditional funeral is between $8,000 and $10,000 but can be as low as $5,000 for cremations.

However, while the average, these costs can vary greatly in either direction. The variables that contribute to greater or lesser costs in the death to burial process is a topic frequently addressed by Doughty on her YouTube channel “Ask a Mortician.” Her channel is based upon educating individuals on the wide diversity of after-death options available for their loved ones, in addition to various points of novelty interest within the death industry such as famous mummies and funeral makeup tutorials.

Doughty’s videos lend an often whimsical and lighthearted take to death education. Her approach is defining of what she has termed the “death positive movement,” a social campaign to end the avoidant and morbid stigma around death to encourage positive and constructive conversations on death to become normalized.

She has created a community named the Order of the Good Death to promote the death positive movement through a blog, podcast, social media presence and community events. Their outreach aims to accomplish much of the same goals as Doughty’s YouTube channel but with a greater focus on the death industry as experienced from the family’s perspective (such as the emotional rollercoaster that often follows the death of a close relative).  Additional community members promoting the work of Doughty and the Order of the Good Death may be found on Twitter using the #DeathPositive.

Members of the DePaul community have a unique opportunity to be actively involved in death positivity and education courtesy of the School of New Learning. The class “Dying and Death: Facing Mortality, Celebrating Life” approaches the topic from a personal perspective through self-reflection, the exploration of various spiritual stances on death and overviews of the various options available for the death-to-burial process. Per campus records, it is typically offered once a year, has multiple options to apply class credit to your degree and fills up.

Thus, while most college students have yet to reach the stage in which death is common in their age bracket, they are at the point in their lives where death-related responsibilities are within the realm of very real possibility. Despite this, as evidenced by Flannery, Levonyak and Radocha, college students are operating on misinformed systems of the death industry arising from an American avoidance of the subject.

The opportunities to become informed on death are out there, available and supported by DePaul students — you just have to be positive.