In Case You Missed It: A Look Back at Abloh at the...

In Case You Missed It: A Look Back at Abloh at the MCA 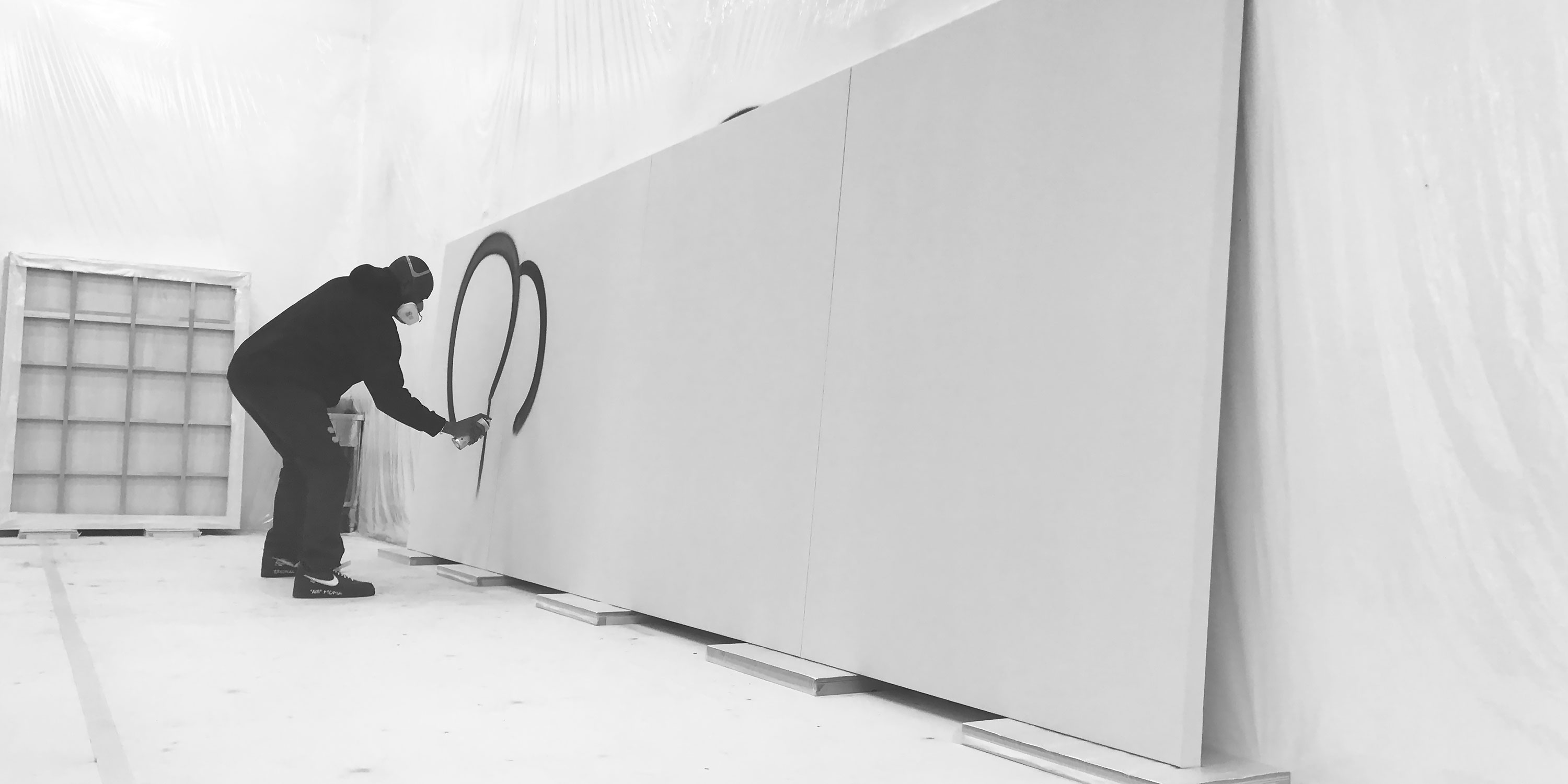 Virgil Abloh: “Figures of Speech” attests that design, art and work can look like a million different things. Backing multidimensional thinkers and producers, Virgil Abloh encourages young visionary artists to explore every facet of a field. Setting an example by being an interdisciplinary curator, Abloh pushes young creatives to be expressional and limitless in their work.

38-year-old Rockford native Virgil Abloh has spent the past decade making a name for himself. The American fashion designer is best known for the founding of the French Milan-based fashion house Off-White and his numerous works as the artistic director of Louis Vuitton Men.

As Abloh’s exhibition travels from Chicago to the High Museum of Arts in Atlanta (opening November 12), let’s take a look back at when the exhibit was displayed at the MCA.

The exhibit gives power to the process — it includes the display of prototypes, sketches and unreleased products. In company with fully polished bodies of work, Abloh arranges an interesting juxtaposition between unrefined and finished for viewers. In addition, the gallery includes large industrial art pieces. Such versatility allowed the work to attract a multitude of spectators. Abloh says the work was created to intrigue both what he refers to as “the tourist” and “the purist.”

The first room of the gallery offers the viewer a glance into Abloh’s relationship with streetwear. Before becoming haute-couture, streetwear was primarily cultivated and embraced by young hip-hop enthusiasts and skateboarders. The now universal look characterized by sneakers and oversized hoodies has taken a much larger shape in the world of high-fashion. Yet, the origins of streetwear culture must not be forgotten. Streetwear is an expression and young aspiring designers/stylists continue to find their voices through its culture.

“Figures of Speech” pays respect to streetwear culture, and in the first gallery work from Pyrex Vision, Abloh’s first solo project, is put on display in a short video clip. The project was greatly influenced by skateboard and streetwear culture. Unique to streetwear style, the Champion collaborated collection makes use of large logos and graphic prints. Abloh further reinforces the notion that streetwear is a movement— not a fashion trend. 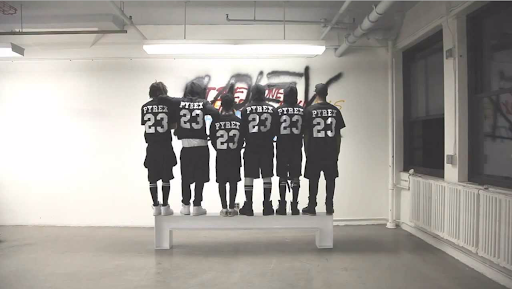 In conjunction with the clip, a woven rug created by the contemporary Canadian artist Jim Joe that says “It’s highly possible Pyrex simply bought a bunch of Rugby flannels, slapped “PYREX 23” on the back and sold then for an astonishing markup of about 700 percent,” goes to show that style and brand can and should be created by young entrepreneurs, who can turn inexpensive materials into high art. Abloh encourages the participation of young people in streetwear. In a press statement on the exhibition, Abloh said, “Any time an idea takes shape on a particular surface — a photo print on a screen, a billboard, or canvas — it becomes real.” 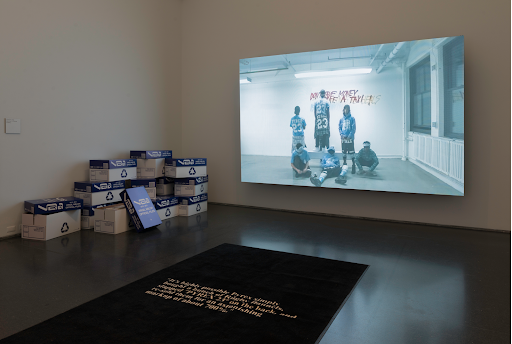 The second room of the gallery gives viewers a look at some of Abloh’s work in the world of high-end fashion. Abloh founded the fashion company Off-White in 2012. Work from Off-White’s Spring/Summer Women’s 2017 Collection “Natural Woman”  are displayed alongside the Men’s Fall/Winter 2018 Collection “Business Casual.” The Women’s Pre-Fall 2018 Collection “Mrs. Von Freytag” and T-shirts from the 2019 Louis Vuitton Men’s Spring/Summer runway show were also put on display.

What is more the second gallery of the second room showcases a series of screen-print frames from an unreleased Pyrex Vision line, putting emphasis on the creative design process. Although the collection never launched — the prints represent conceptuality. This emphasis is revisited in the fifth gallery, “Design”— featuring unreleased and prototype Nike x Off-White sneakers. 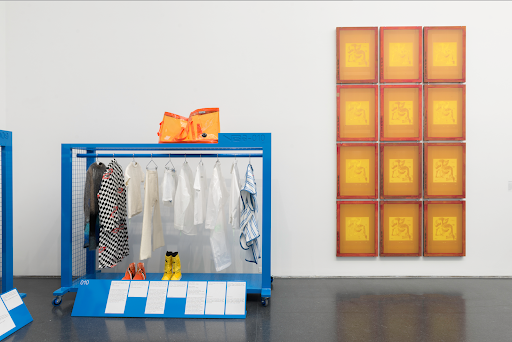 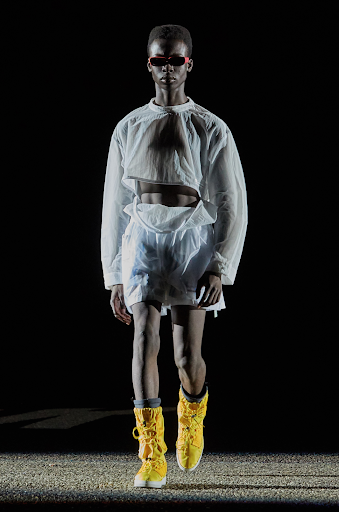 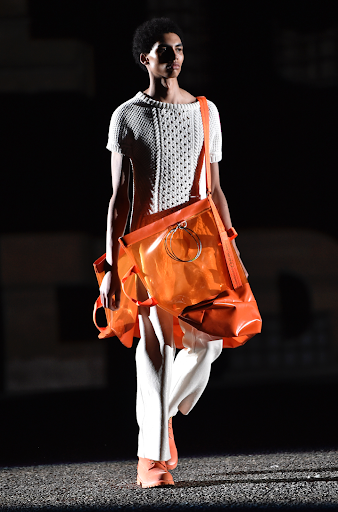 Just as hip-hop and streetwear go hand in hand, Abloh’s musical accord and design aesthetic pair up. There is a constant fluidity that can be observed across Abloh’s work in both fields. “Figures of Speech” features collaborations between the designer, Kanye West, Jay-Z and A$AP Rocky. The gallery includes a large acrylic design of Kanye West’s album Yeezus and a press plate of Jay-Z and Kanye West’s collective album Watch the Throne — both album covers graphically designed by Abloh. The third gallery also includes (my favorite) a photographic print of Chicago rapper Chief Keef wearing a Supreme x Abloh collabed T-shirt. 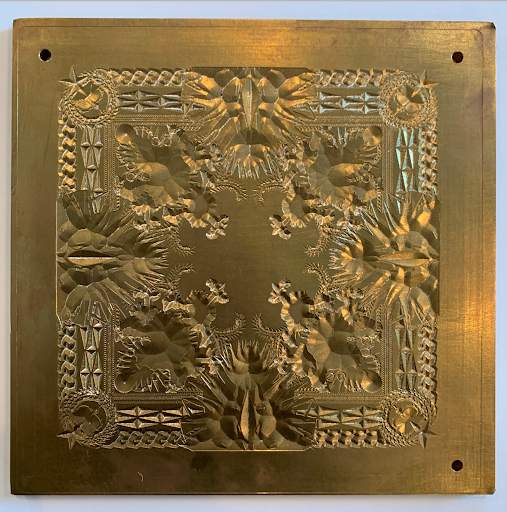 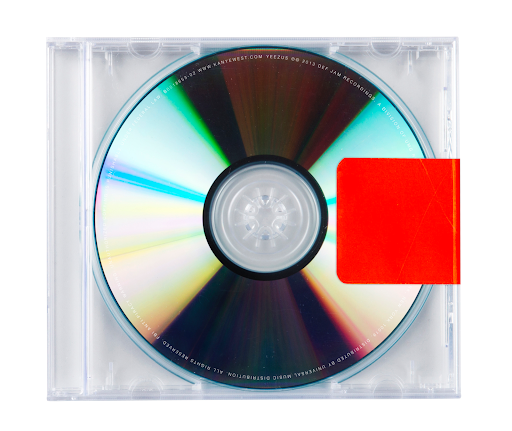 Further into the third gallery Abloh and Bantal introduce Abloh as a DJ. Abloh began his career DJing under the name DJ “Flat White” in his early teen years and has played many shows. Even as a DJ, Abloh aims to create a symbolic experience, to convey a larger message. Often his sets and fashion shows will include various broken up and pieced together spoken word soundtracks.

“Figures of Speech” features a display of Abloh’s Transparent audio mixer, a collaboration with Pioneer DJ, including the CDJ-2000NXS2 and DJM-900NXS2 mixer models. Found beside the transparent mixer models are a large stack of printed (on vinyl) digital flyers Abloh created to promote upcoming sets. 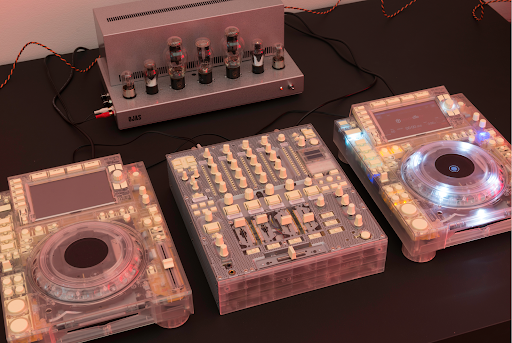 The fourth gallery — arguably the most important in“Figures of Speech” — offers an interesting perspective on Abloh’s position as a person of color in the predominantly white world of high fashion. You’re Obviously in the Wrong Place, stylized from a line in the film Pretty Woman (1990), makes a commentary on this position. Other pieces in this part of the gallery include images from Abloh’s first campaign as the creative director of Louis Vuitton Men and larger contemporary art pieces. The Spring/Summer 2019 Louis Vuitton Collection “Dark Side of the Rainbow” focuses on Black boyhood. The campaign features a three-year-old wearing colorful pieces from the collection, marking hope. On the ground next to the campaign prints lies an array of 13 yellow crime scene markers — this piece titled “Options” addresses gun violence in the Black community. Put in juxtaposition to the campaign photos, the pieces draw a contrast between optimism and despair in the Black community. 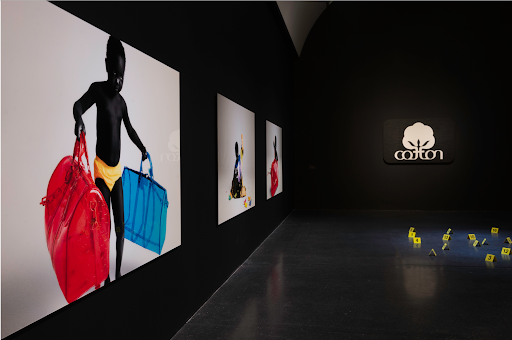 Campaign images from Louis Vuitton Men’s Collection Spring/Summer 2019. (“Dark Side of the Rainbow”), 2019. Courtesy of MCA. 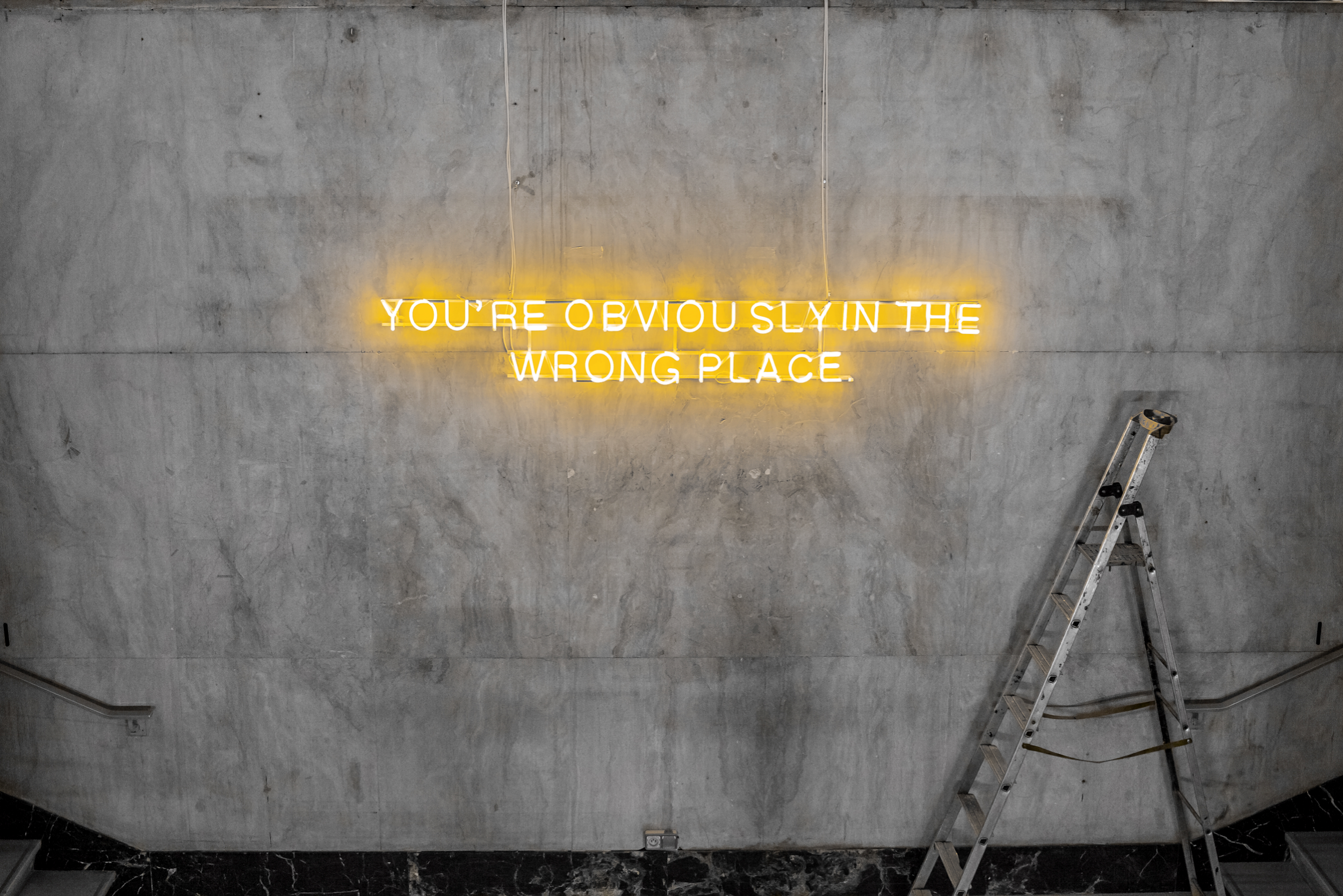 The fifth and final gallery “Design” gives attendees a deeper glance into Abloh’s training in architecture. In this gallery goers get to see an array of pieces — including contemporary art designs, ceramic work, Nike x Off-White sneaker designs and even Ikea x Abloh designs. Influenced by graffiti design, skateboard culture and architectural patterns, Abloh aims to fuse all three into his work with furniture design. In the center of the gallery viewers are presented with an arrangement of two benches and one chair. The unconventional furniture pieces resemble the structures of outdoor skating parks. Covered in brightly spray painted symbols, the furniture pieces clearly highlight Abloh’s love for streetwear/skatewear design. Even better, the pieces are still functional.

Displayed across from the furniture pieces are prototypes of unreleased Nike x Off White sneakers. The prototypes offer goers a greater behind the scenes view into Abloh’s take on shoe design. Abloh aims to emphasize the construction of the shoes by using transparent and lightweight materials.

More challenging pieces in the final portion of the exhibit included large reproductions of advertisements and billboards. The only recognizable advertisement is a recreation of a Newport ad. The ad promotes the welfare of smoking cigarettes. The other billboard like reproductions simply say “ADVERTISEMENT HERE  +1 855-633-9483” and “TELEVISION” on them. A large gas price sign is also displayed in this part of the exhibit. Abloh is addressing the power of adverts in this gallery. 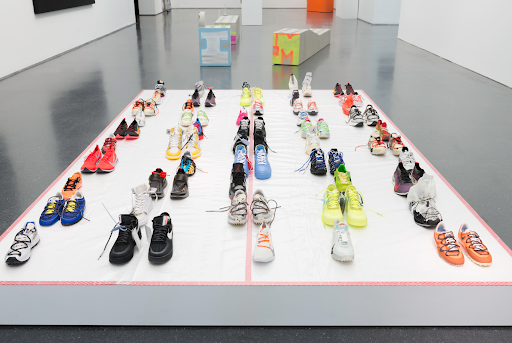 “Figures of Speech” follows Abloh’s journey as a curator, shows his progression and details his multifaceted practice. In balancing the worlds of fashion, music and numerous other categories of work, Abloh is a testament to multidimensionality and consistency. His work encourages young creatives to question traditionalism, replace it with individualism and never ration out creative ability. Instead, Abloh argues that creative thinkers can and should produce work all across the board.