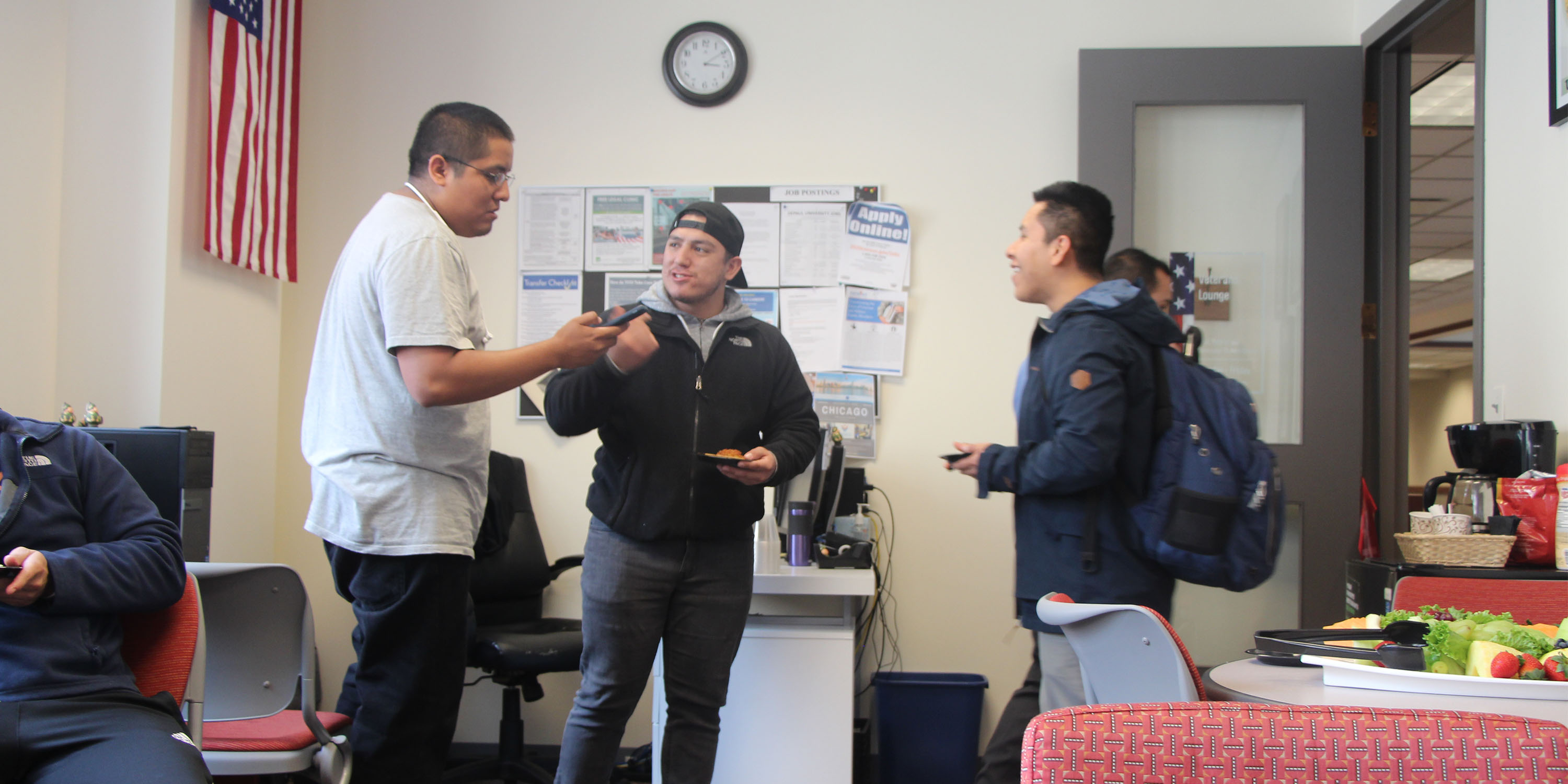 Student veterans have participated in events and other year-round activities in and outside of their lounge after DePaul Student Veterans Union cut the ribbon for the new lounge on October 1, 2018.

Matthew Sanchez, the vice president of the Student Veterans Union and a Veterans Services liaison who is in charge of fostering relationships, described how the lounge continues to be a space for volunteers to be involved and to build community.

“It has been awesome. We have veterans who use this space. People who are unfamiliar with the lounge peep their heads in and take a look,” Sanchez said. “Someone told me [the veterans lounge] has one of the highest user rates in DePaul. I think it is very cool and believable and it is a great tool.”

As a way to celebrate Veterans Day on Monday, November 11, the DePaul Student Veterans Union hosted a variety of events to recognize and celebrate veterans within the DePaul community. A luncheon and coffee and doughnuts with a veteran were some of the many ways DePaul helped in celebrating Veterans Day.

Sanchez served as the organizer for the coffee and doughnuts with a veteran event on November 4. The event was a way for students to talk with faculty and veterans on campus and raise awareness of Veterans Day.

“A lot of students are not aware that we have the highest population of veteran students in the Chicagoland area,” Sanchez said.

Sanchez mentioned how many students may know or be related to a veteran.

“I can talk to them about my service and about their service as a way to build that community, not just in the veterans community, but the whole DePaul community,” Sanchez said.

Senior George Murad, who is a member of the Students Veterans Union and is studying management and information systems, is an active member in the veterans community.

“The veterans lounge is the center of gravity for DePaul’s veterans community. We have a student who graduated and comes in sometimes and talks to people and hangout,” Murad said.“This shows you how much the lounge does for a lot of veterans because it makes them feel like they are at home again.”

Murad’s parents immigrated to America as war refugees during the Lebansese Civil War. They raised him in Chicago.

“As a way for me to give back to them, I served in the Marine Corps for four years,” Murad said. “I went to the College of DuPage for my first two years and then transferred to DePaul.”

For Murad, one adjustment he had to make when transferring from the military to higher education was adapting to expectations he puts on himself.

“There is definitely a little bit of a culture shock because it is two completely different worlds,” Murad said. “In the military, there are such high expectations and then you come to a school setting where things are more relaxed, but you have that anxiety of making sure everything is perfect in terms of needing to take a break.”

As veterans are away from the military longer as time progresses, Murad noted that veterans then learn the ropes of college life and eventually become comfortable with it.

“My experience coming to DePaul was a little bit different because I went to College of DuPage, where they have a really good veterans program and a huge lounge,” Murad said.

While at College of DuPage, Murad found it easy for himself to connect with other veterans on campus and make friends, but had a more difficult time when he transferred to DePaul.

“The Veterans Office is super helpful. I think they are the best that there is,” Murad said. “There was no kind of connection here to the DePaul community because there was no center of gravity like a lounge or so forth.”

Murad joined the Students Veterans Union as a way to help give the Veterans community a lounge because coming from College of DuPage, he saw what that lounge did for the veterans community.

The lounge continues to have more programs and new ideas to increase the amount of veterans that use the lounge and its services. Last year, the previous president of the Student Veterans Union helped to make a mini library.

“We are putting in textbooks that people don’t really use anymore. It is a way for veterans and students to come in and use a textbook they need and be able to give it back,” Sanchez said.

The lounge will constantly be a work in progress, according to Sanchez.

“If you are just sitting in the library, you will be talking to a DePaul student or the DePaul student might be half the same age sometimes or you might be 10 to 15 years over them,” Murad said.

A lounge allows veterans to talk with other veterans, see what they have gone through, share their experiences and share common interests with people.

“When you come out of the military, all of your friends are married with wives, have jobs or moved out to other states, so it is hard to find some new friends sometimes,” Murad said.

Sanchez said much of the event planning revolves around the veterans liaisons. He credits Megan Giedraitis with giving the liaisons a lot of leeway to own and plan these events.

Besides Veterans Day, another important day the liaisons help organize is Memorial  Day.

“Every year we do Veterans Day to honor current veterans and soon to be veterans. Memorial Day, it is for people who have passed away in service or who have already passed away,” Sanchez said. “We like doing that distinction because it gives us this opportunity to talk to DePaul students about the difference between both holidays and the importance between them.”

Another area where the veterans are able to grow is with personal development.

One rewarding part of being a veteran liaison for Sanchez is job fairs. The veterans had a job fair in October, and one of the students that attended last year came back this year  as a representative for a company that he had interned with because of that job fair.

“I love seeing that the stuff we are doing to help students be successful are showing off,” Sanchez said. “These students deserve these opportunities and need just a bit of guidance to get there.”

An annual conference is another way where student veterans can receive professional development with the Student Veterans of America Conference held in California in January.

“They throw the biggest convention in the world essentially for veterans. It is a combination of both a workshop on how to build a better community on campus, get people engaged, and run a club,” Murad said.

The Student Veterans Union is raising money to take eight DePaul veterans to this conference.

“A lot of job fairs that we go to will be talking about these employers have jobs and they don’t know how to steer us in the right direction that will best fit our skills,” Murad said. “This convention they have employers who come specifically with jobs for veterans that qualify for a job and that they want to hire on the spot.”

Last year, six veterans went and all received job offers, according to Murad.

As a liason, Sanchez noted that one rewarding aspect of the job is being able to help a lot of new students who can kind of feel lost. He mentioned how everyone tells a veteran to attend college and to use their benefit. Coming to college from the military can be a strange transition. However, many resources are available for students to help ease the pressure of adjusting to the university. The Student Veterans Lounge is just one example of these resources available to student veterans.

“I love it because, having been here for awhile, I feel when I get a brand new student I can give them a playbook and tell them what are some right and some wrong things to do, the resources available to you and to get you to get a job and finish school,” Sanchez said.