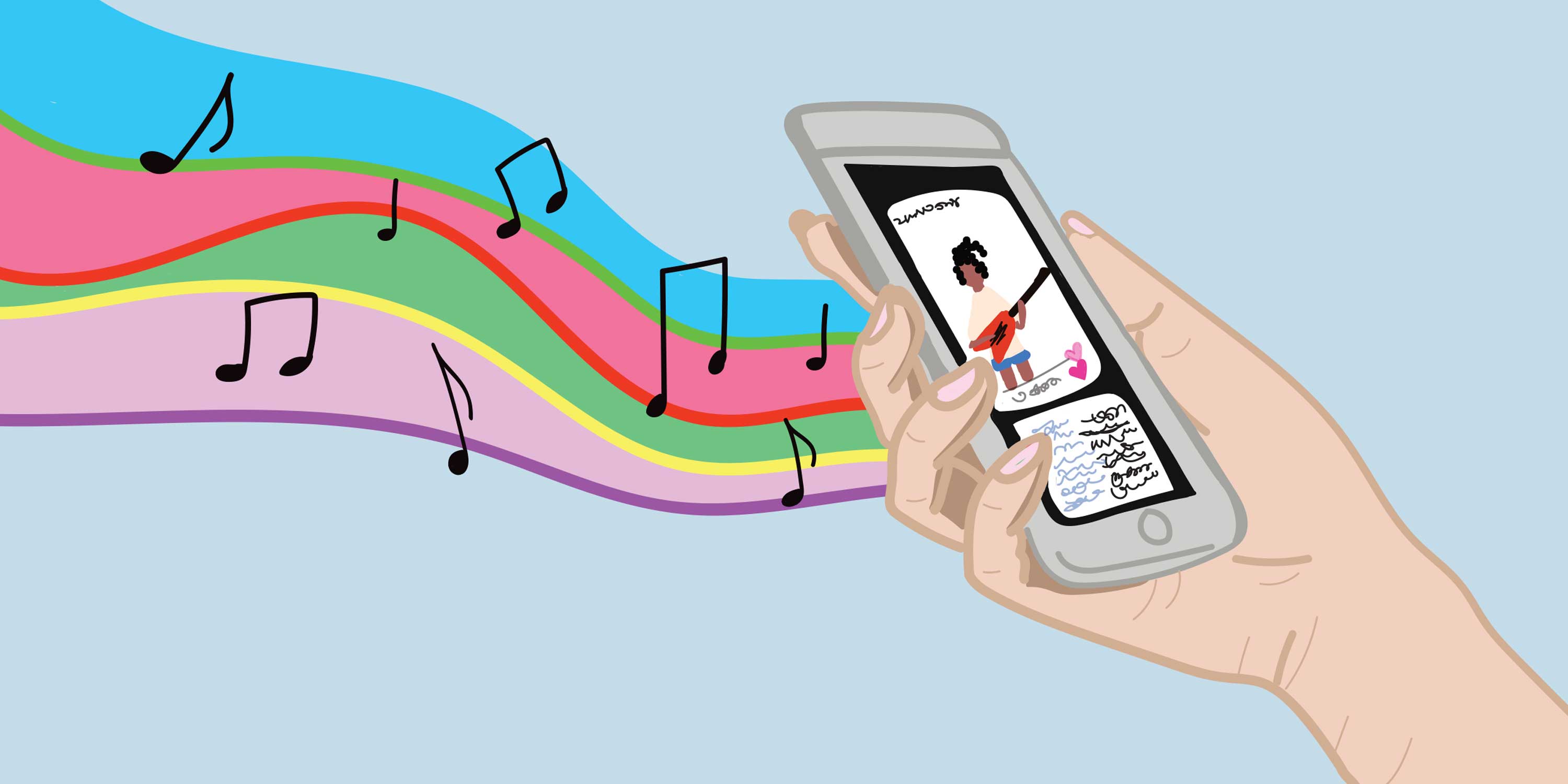 A junior at Columbia College Chicago pulled off a livestream music fest off of her Instagram meme page with an unlikely but incredible lineup of some of the current faces of indie pop/rock –– Beach Bunny, Snail Mail and Soccer Mommy. Chicago band Beach Bunny was supposed to play Coachella. Soccer Mommy and Snail Mail both performed at Pitchfork last year. These are not easy artists to book. So how did Meg Memes account owner Meghan Magats get such big-name artists to play on her Instagram Live in just a few days? The answer is a fangirl’s dream come true. They’re fans of each other’s art.

Magats said they all were just a message away.

“Soccer Mommy was one of the first followers of Meg Memes,” Magats said. “We play a lot of the same video games and we would DM sometimes.” Soccery Mommy is the project of 22-year-old Sophie Allison. Allison liked the memes Magats made about her own project.

The album purposefully balances her original imperfect bedroom recording feel with the new studio recording sound. Clean feels like a journal of an old soul — dealing with problems with both grace and dignity. The powerfully relatable lyrics paired with its fuzzy instrumentation  takes listeners on a daydream back to their own memories. Her most recent album, color theory, carries even more depth, maturity, detail and well, color. Each song is paired with a color, and each color has a theme — a metaphorical synesthesia. Coincidentally, Soccer Mommy and Tomberlin, another band that played the fest, were actually supposed to play a show in Chicago the same exact night as the livestream. 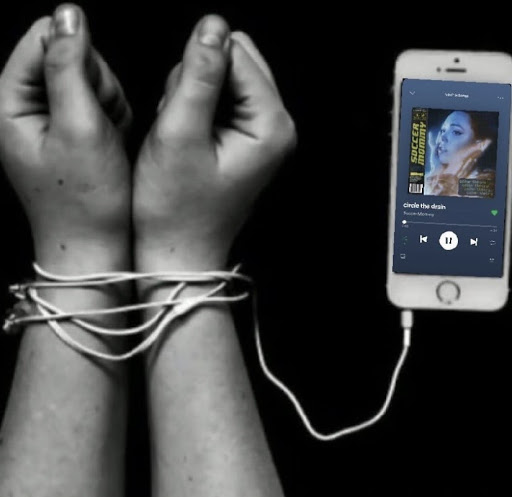 The account is full of memes that are not just about her love for Soccer Mommy’s music, but also other indie pop/rock bands, Animal Crossing and her hatred for psych rock (except Tame Impala, they’re good). Meg Memes (@meg_memes) first began as a Facebook page where she posted memes that she liked because she did not have enough storage on her phone to save them. Then one day at a party, she met someone who made their own original memes and thought she should do that too. The word meme was created years before the internet –– and is roughly defined as an idea that spreads from person to person in a culture. Magats is essentially spreading the indie pop/rock culture. 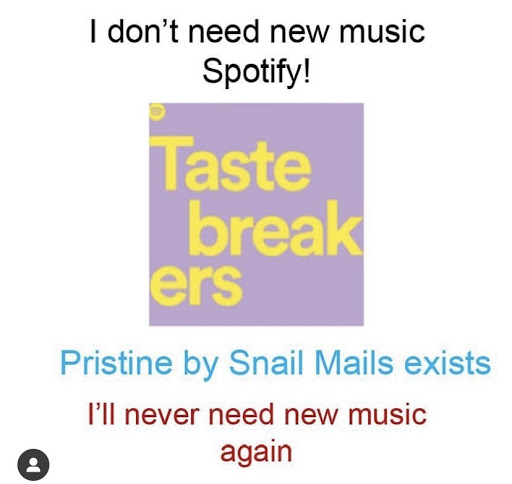 For Magats, making memes is fun. “Something can be so funny and so stupid, but it brings me joy.” Now that we’re having to stay inside during the COVID-19 pandemic, she said memes can help distract us for a little while and “just have a good laugh.” Meg Memes has positively impacted her life.

“Phoebe Bridgers’s drummer, Marshall Vore, was also one of the first followers too and we became friends. I just became friends with these people,” Magats said. She also had mutual friends with Lindsey Jordan of Snail Mail. “Everyone was like a message away, really.”

Snail Mail’s debut studio LP Lush dropped just months after Soccer Mommy’s. Within that same year, Snail Mail went on a headliner tour. Jordan’s voice is sweet, emotional and dynamic. Even without listening to the lyrics, her voice carries impact. The slow tempo and textural guitar leads carry her strikingly straightforward words about love to jab at listeners’ hearts. Lush digs into every step of heartbreak, all avenues of pain, and ultimately ends with a song that lets it all go. The songs translated beautifully as a solo acoustic set on the livestream.

Meg Memes Fest might have been one of the first few fests to be held entirely on Instagram Live. The ability to go live is nothing new; however, since social distancing and stay-at-home orders have been enacted, there has been a 70 percent increase in usage. “It’s just like FaceTiming in front of people,” Magats said. Except this FaceTime call had 18 different guests and nearly a thousand viewers at once.

It is not easy to run an entire event by oneself, even if it is all virtual. “It was new for me,” she said. There were 9 acts each day back-to-back for about four to five hours. “I got tired of hearing myself talk,” she said. Sometimes the WiFi would lag or the audio would cut out. She ended up using her sister’s phone to get better quality and reception. Magats was the MC of the entire fest, introducing the acts and asking them questions.

But logging into Meg Memes Fest did not feel like the audience was watching a staged production. Instead, it was intimate, conversational, and perfectly DIY (do-it-yourself). It was quirky and unconventional. She asked the artists lighthearted and sometimes silly trivia questions — nothing that a typical interviewer would ask. Magats satirically would pull questions from an article titled “164 Uncommon First Date Questions,” as well as ask for their hot takes on celebrity couples or their favorite character from the musical comedy-drama series Glee.

“I didn’t want them to feel like this was a chore,” she said. “They’re asked the same questions over and over again so I wanted to make sure that I wasn’t asking them a question that they’ve been answering the past few months.” 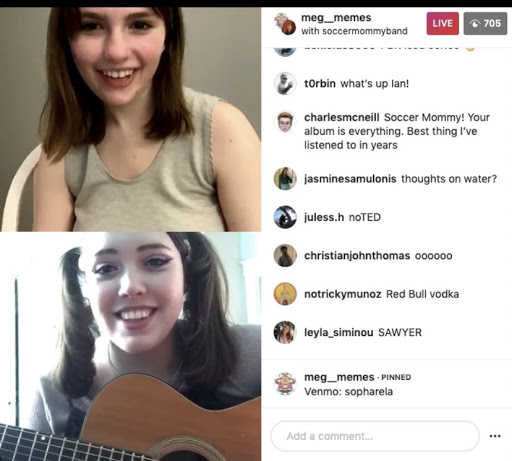 Here’s a few quirky things we learned about some of the artists:

At one point during the stream, the official Instagram account for Men’s Health started watching. In the chat, the account requested Allison to play “circle the drain,” one of her songs off color theory. Magats did not previously know the owner of the account and found out they were a genuine fan of indie rock. Men’s Health quickly became a meme within this meme fest. People were talking about the account in the chat. One viewer wrote, “men’s health meet me in the pit.” Magats said they apparently found out about her fest during Phoebe Bridgers’s livestream with Pitchfork that day. Within the chat, some viewers sent messages telling Men’s Health to watch Magats’s livestream.

The comment section was filled with more comments than jokes about Men’s Health. Instead of singing along to a live show, people were typing the lyrics out. Fans sent song requests and shared their admiration. Nothing was staged — artists would adjust their video angle, get up to turn on a light, sip their drink, and tune their guitar in front of us. Magats and Snail Mail talked about soap that Magats had given her, how she used it on tour and that she wanted more. Watching everyone sitting in their bedrooms reminded viewers that artists are people too. They also have to practice social distancing. In this space, everyone saw them as friends. 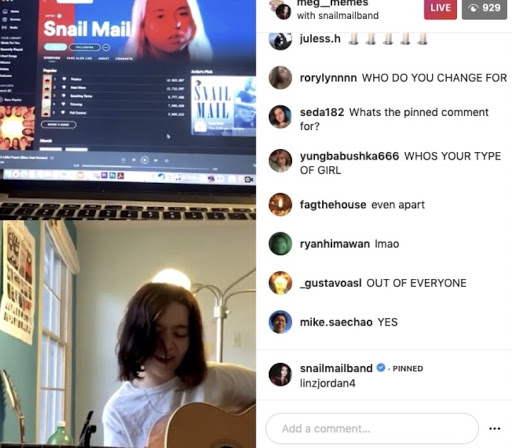 “Livestreaming solo can be really awkward just talking to a camera, so it was really nice having someone to chat with on the other end,” Lili Trifilio of Beach Bunny said. Trifilio is a DePaul alumna and credits the school for bringing her bandmates together to form Beach Bunny. The band released their first studio album Honeymoon on Valentine’s Day of this year. Beach Bunny tastefully contrasts Trifilio’s lyrics of pain and deep emotions with fast tempos and colorful melodies that help the audience feel empowered and validated. “I also loved that the fest had such a nice diversity of acts and really highlighted ladies in music, which is rare.”

“Like a lot of other local bands, we had quite a few shows get canceled this spring. At a time like this when we can’t really get together as a band, play live shows, or work on music together, performing online is so exciting. It gives us the opportunity to gain exposure and an audience we likely wouldn’t have reached otherwise,” band members Kim Locke and Stas Slyvka said.

“Also, being on the same lineup as acts like Soccer Mommy, Snail Mail and Girl K for Meg Memes Fest was super sick! Meg is a gem,” they said.

Several relief funds have been created in an effort to help the music community that relies heavily on live performances for their main source of income. Since the streaming era slashed the sales of physical music, artists have relied on live performances. Magats had each artist share their Venmo username so fans could donate to them if they wanted to.

“None of us currently depend on music for an income, but we know plenty of other bands do. Without shows going on right now, livestreams like this are so important for artists to make the money they need,” Locke said.

“It was also super thoughtful to include everyone’s Venmos/PayPals in the stream to help musicians make some side cash while everyone’s tours have been put on halt because of the virus,” Trifilio said.

Magats said this most likely will not be her last fest. She said she received a lot of positive feedback from viewers as well as a bunch of bands asking to perform on the next livestream. Phoebe Bridgers and Pom Pom Squad are a few of the artists she has in mind for her next stream.

The pandemic has likely changed the future of live performances and the music industry at large. Even after the stay-at-home orders are lifted, many artists will probably continue to put on livestreams in addition to in-person shows. A survey done by Bandsintown reported that about 70 percent of fans were not only willing to keep watching livestreams in the future — they would also pay for them. Eventually, venues will open back up and festivals will run again –– but Meg Memes Fest is here to stay. So are the memes.