Art in the Time of COVID: How the Theatre and Musi...

Art in the Time of COVID: How the Theatre and Music Schools Tackle the Impossible 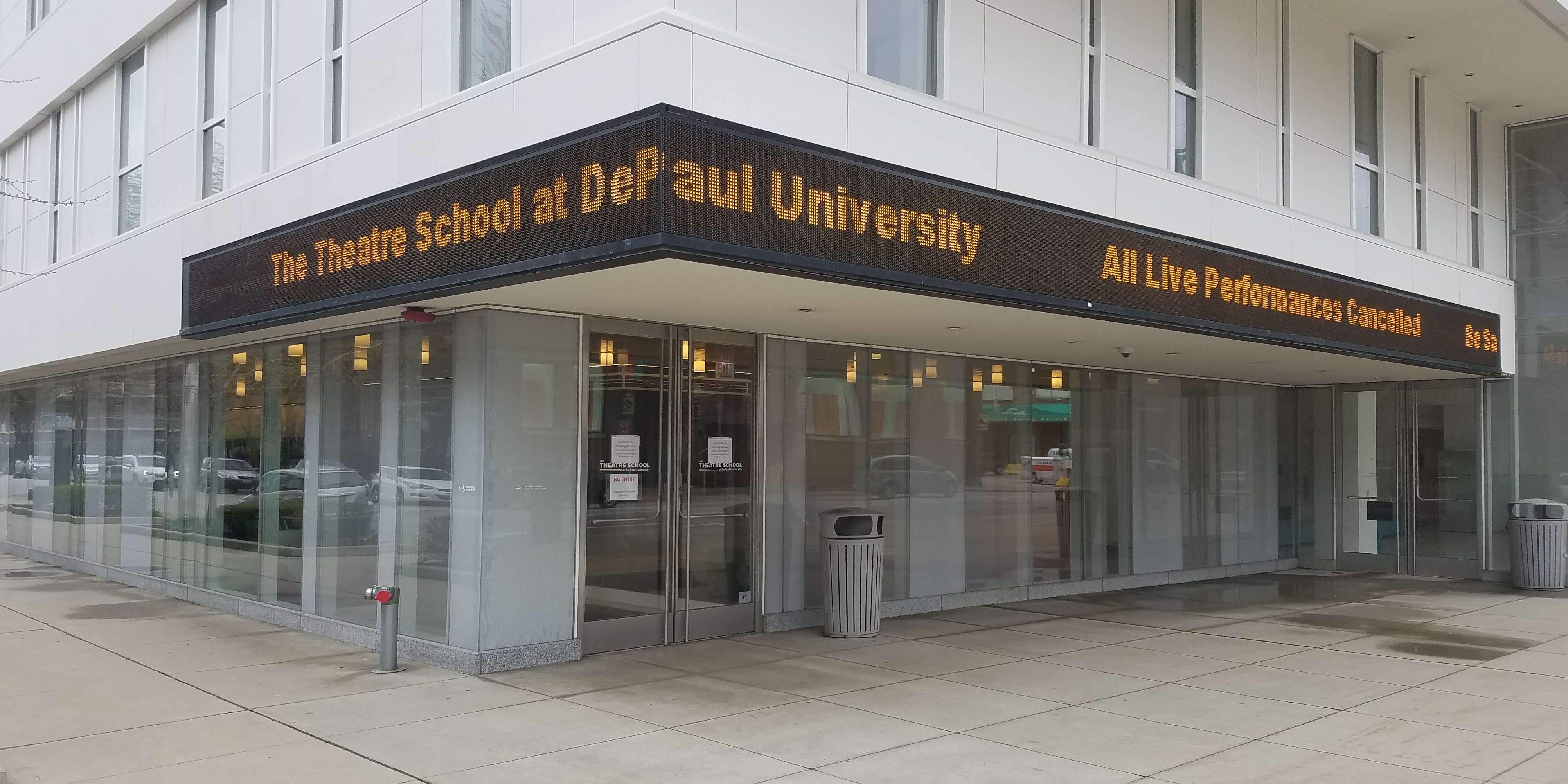 Bridget Harris composes herself before looking into her propped-up cellphone and pressing record. A light stands just behind her phone, illuminating everything in the frame. In preparation for the recording, Harris had to rearrange her room to expose a blank white wall behind her — the perfect backdrop for recording monologues and audition tapes.

Since March 11, Harris has made many adjustments to accommodate her new reality as a fourth-year theatre student acting from inside her apartment during the COVID-19 stay-at-home order. There is no audience, no classmates, not even a professor to give feedback. Just Harris and her phone.

“I think a lot of us were in denial when we first got the news,” Harris said. “I think The Theatre School, and myself included, tend to think that we’re special or exempt from certain rules… we didn’t really think that [DePaul] would make us go to Zoom.”

While the shift to remote learning has been difficult for many students, the challenges are heightened for those pursuing degrees where success is dependent on in-person interaction.

“In normal times we’re a conservatory with very intensive classes and production assignments,” said Jason Beck, the assistant dean of The Theatre School, “very much a learning-by-doing environment.”

So when the university announced that Spring Quarter classes would be remote, Beck was skeptical about how acting and movement classes would work.

“Our initial response would have been, ‘You can’t do this, it’s not possible,’” Beck said. “What we found is that for a limited amount of time… you can still accomplish some teaching and learning in this environment.” 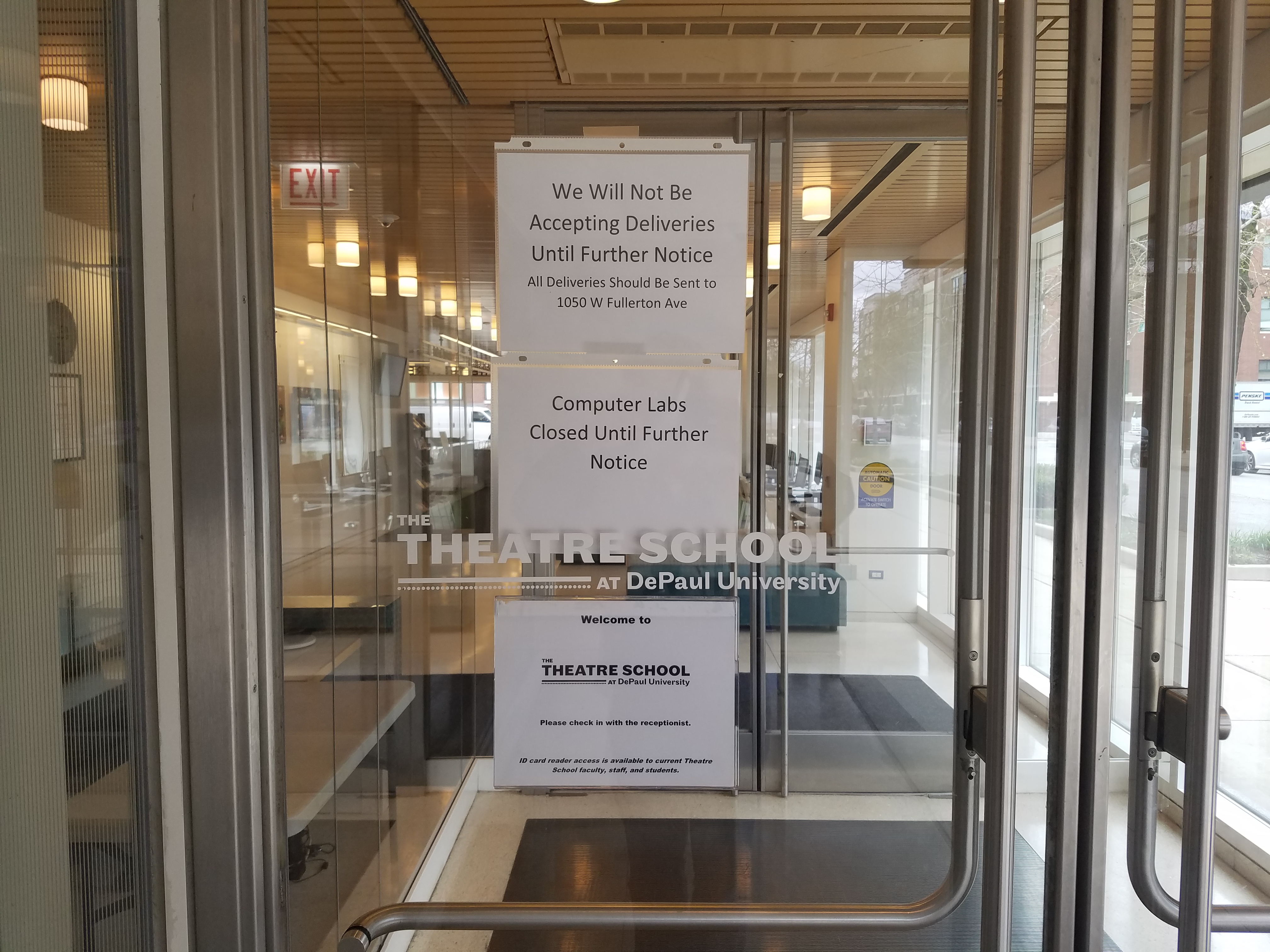 Notes on the doors at the entrance to the Theatre School note that the building is not accepting packages and the computer labs are closed. Christopher Silber,14 East.

For some courses in The Theatre School, the transition has been easy. History of dramatic literature, for example, is a course that can be easily completed online or over Zoom — two platforms DePaul students have become well acquainted with this quarter. Other classes are facing some complications.

“Part of the freedom of The Theatre School building is being able to experiment with vocal quality and tone and phonating,” Harris said, explaining how the same work becomes more difficult when done in a two-bedroom Chicago apartment, equipped with a roommate or families in the same building.

“I’m doing my best to show my teacher that I’m putting in effort without having the cops called on me,” she said.

Students at DePaul’s School of Music are also finding that remote learning might never be able to replace the kind of top-notch conservatory education that they were getting just a quarter ago.

“Part of what makes music so great to do is that you get to collaborate with people,” said Matthew Osuch, a third-year music performance student. For Osuch, collaboration with other musicians is difficult when they can only meet via Zoom.

Like Harris, Osuch was doubtful about how his courses would continue online when so much of his major requires in-person practices and performances. Even being able to go to the School of Music puts Osuch in a more productive frame of mind.

“There’s something about the mental shift that happens when I go into the practice room,” Osuch said. It disciplines him, and motivates him to focus on his instrument, the clarinet, above everything else.

Not only can he no longer access the space, but Osuch said that using Zoom for music is nearly impossible.

“The audio recording through Zoom is just not optimized for instruments,” Osuch said. Since the software is meant to detect human voices, the high notes of his clarinet are consistently muffled, or even unrecorded. “There’s a lot of things that are hard to assess in the recording because you’re not really listening to a good, true representation of what the person’s actually doing.”

Not to mention the pesky lag that plagues most video conference programs, making performing with multiple musicians over Zoom a nearly impossible task.

“It’s hard when you’re teaching a class that you typically have kids singing and moving and now you’re on Zoom and if you get everyone to sing together it doesn’t work because there’s a slight lag,” said Jacqueline Kelly-McHale, the department chair for musical studies and director of music education at DePaul’s School of Music. 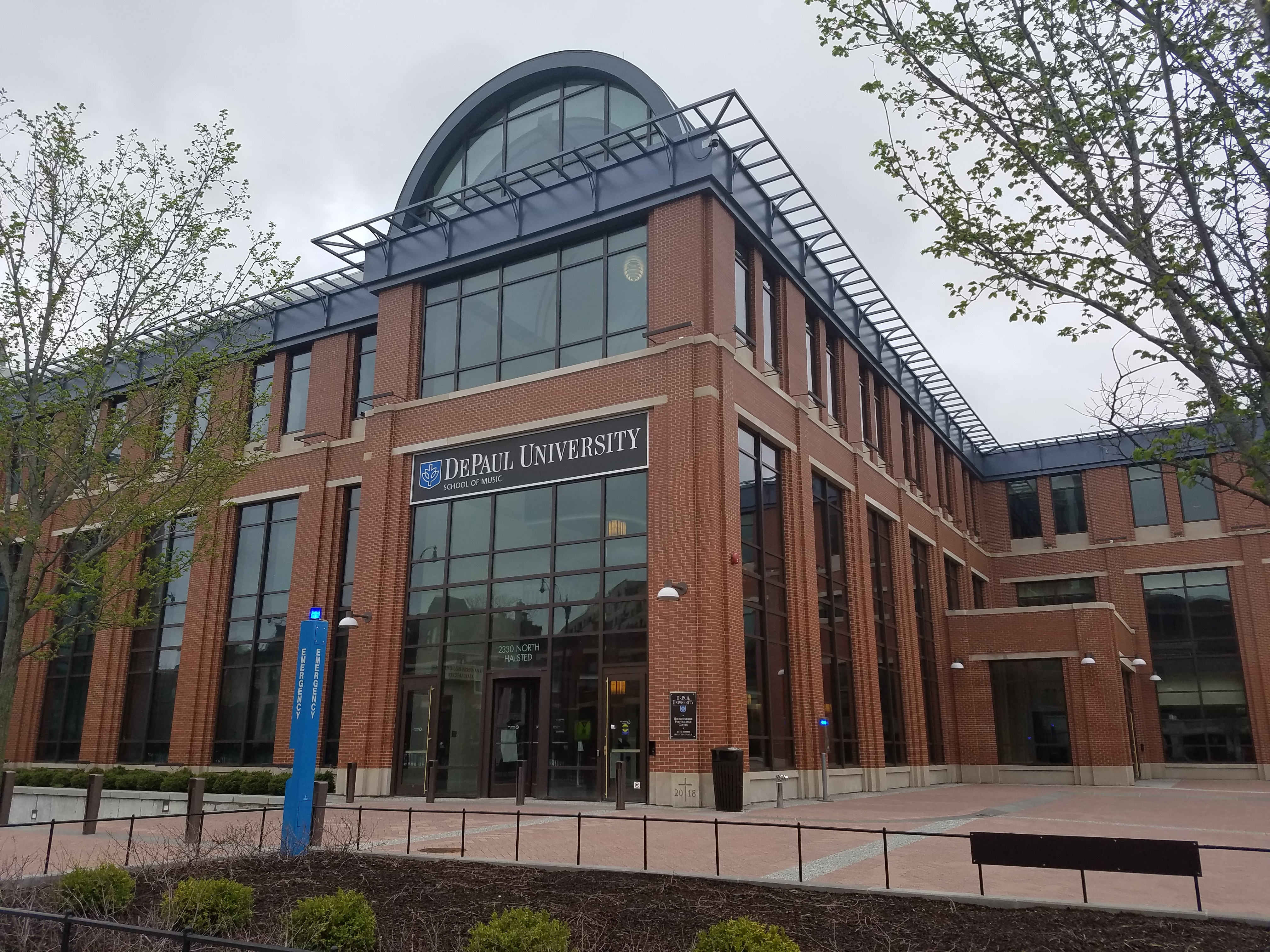 While adapting to the changes of day-to-day courses has been difficult, both The Theatre School and the School of Music have made great strides in providing their students with the best education they can get.

“Sure, we’re not able to be in front of an audience in a theatre, but these are still experiences and training and skills that will transfer to the industry once students graduate,” Beck said.

Beck has found that both students and faculty at The Theatre School have been creative with how to execute performances. Some of the solutions include podcast plays, Zoomcast performances and even interactive website productions.

“It’s just taken a lot of creativity and imagination, luckily that’s our field. We are creative people, we work in imagination every day,” Beck said. “For the most part, I think our students have been willing to take that ride with us.”

Despite the disappointment of losing a quarter of in-person acting courses and multiple performances, Harris still feels she is learning a lot about the other side of the industry, which includes taped monologues and cold reads via camera.

And like many others nationwide, Harris stressed the importance of continuing coursework despite student thoughts of leaving the program for the quarter.

Osuch said a positive is an appreciation of the warmth of faculty and easy access to his  professors, many of whom are usually busy performing themselves. 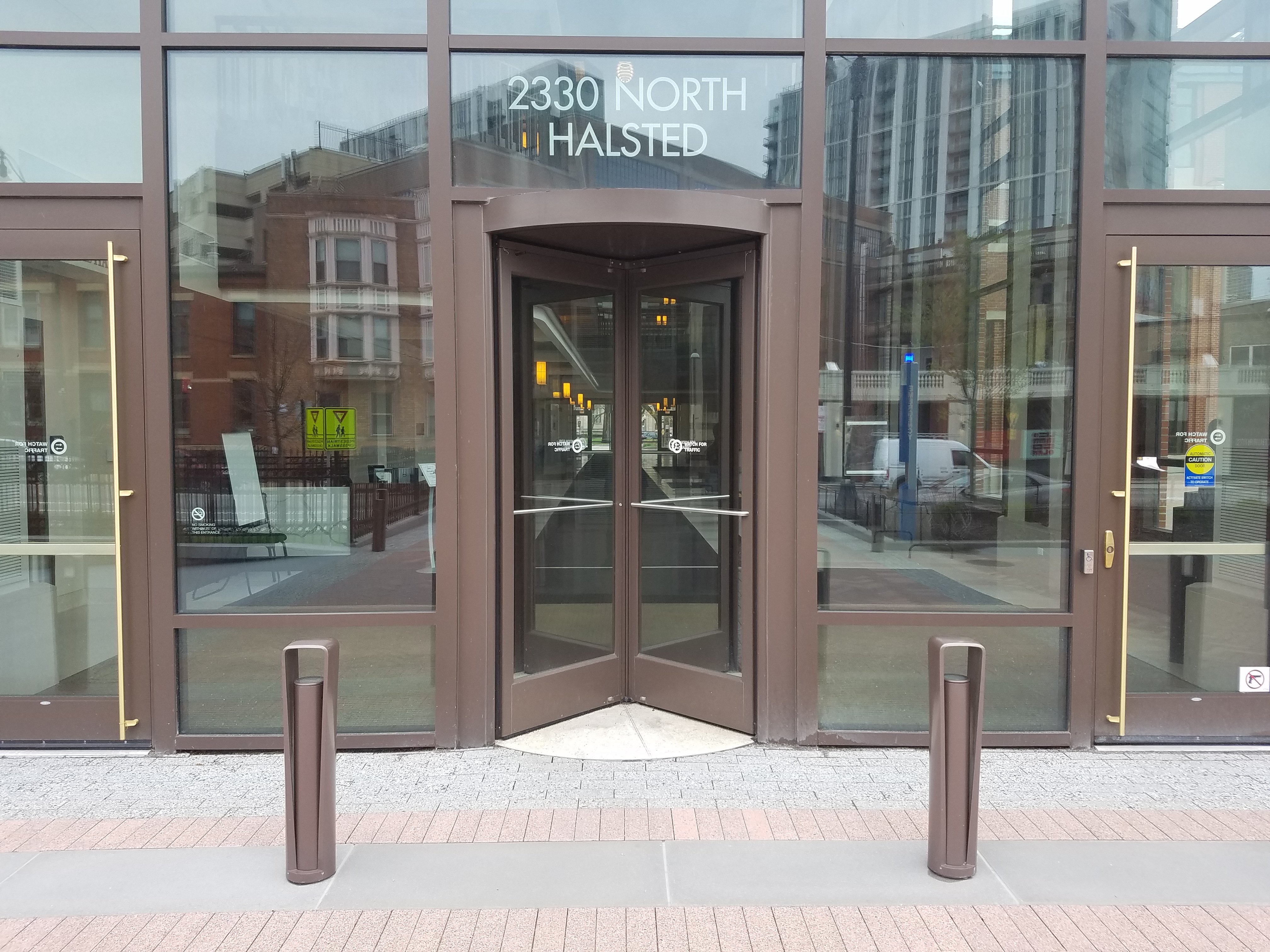 Yet, when looking to the future, both Harris and Osuch are nervous when it comes to losing their performances, a key part of their education as theatre and music majors.

Osuch is concerned with how he will perform his junior degree recital without an audience or concert hall, while Harris has already had one of her shows taken away.

“Each student is guaranteed four shows in their time at The Theatre School, and already I’ve had one of my shows kind of taken away,” Harris said. “If I have another performance taken away in a sense that’s a huge part of my education that I’m missing out on that can’t be resolved through Zoom.”

This shift has left students like Harris feeling as though they’ve lost out on an integral part of their college experience.

“In other situations, people might be able to wait it out, but it feels so monumental to me to have to sacrifice it,” Harris said.

This sense of loss does not just belong to the students; faculty members like McHale and Beck are also grappling with the monumental change in course work and programming while striving to preserve the quality education both schools provide.