Celebrating APIDA Heritage Month May be More Vital than Ever 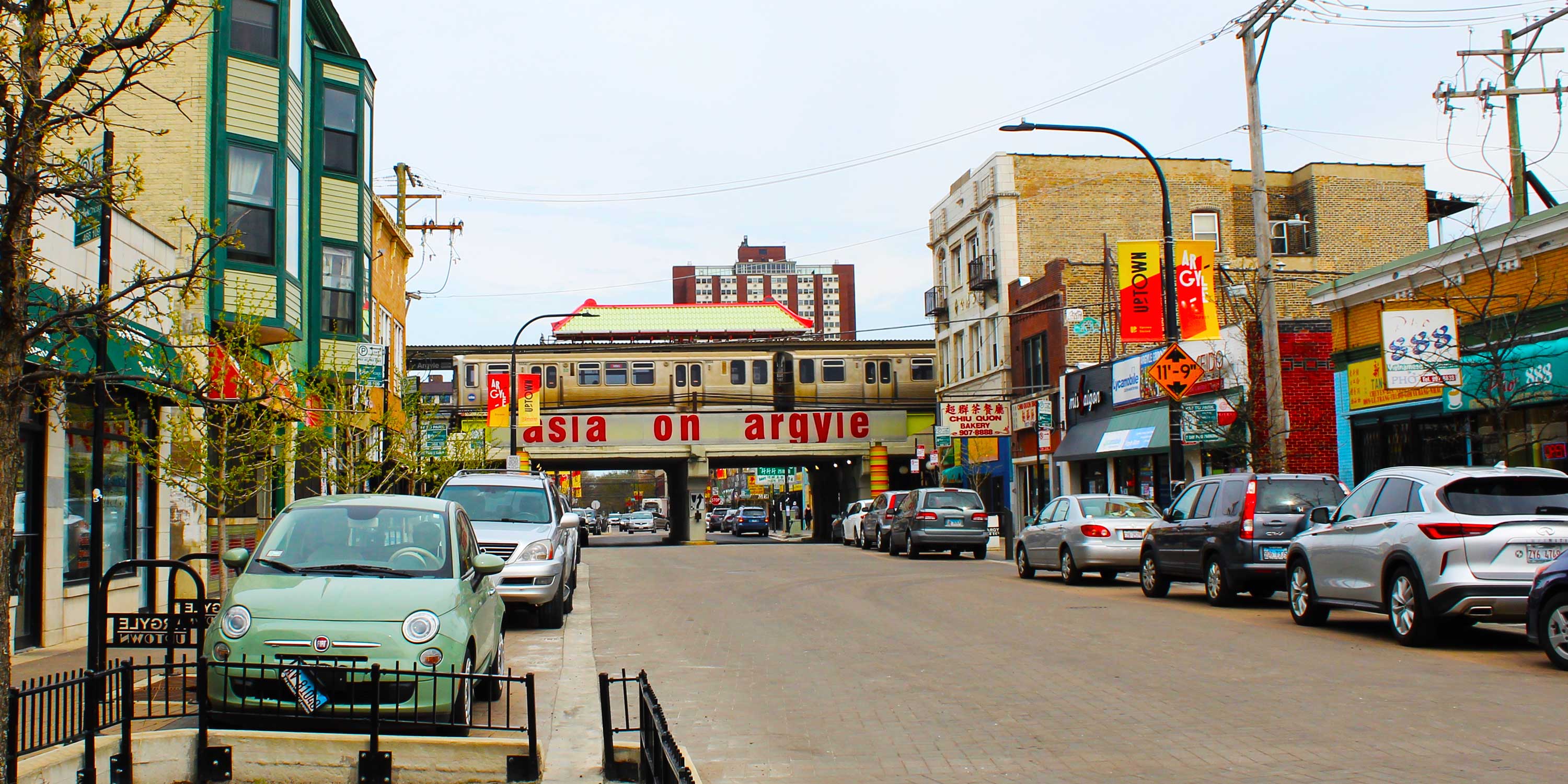 The COVID-19 pandemic has seen an increase in rhetoric blaming China for the outbreak of the virus and anti-Asian hate crimes. Some members of DePaul’s Asian Pacific Islander Desi American (APIDA) community have also noticed racism towards their community becoming more rampant — citing instances of hearing COVID-19 referred to as the “Chinese virus” and “kung flu.”

“There has been a lot of hate directed towards APIDA folks during this pandemic and so I feel like now especially, is the time to try to build, strengthen and care for the community,” junior Tuyet Anh Le said.

Because of these sentiments, members of DePaul’s APIDA community are using APIDA Heritage Month, celebrated in May, to promote public awareness of their histories and uplift one another through solidarity. The tradition continues despite stay-at-home orders and COVID-19 safety measures, but it looks different this year — festivities had to transition online.

Jew thought of the holiday as a way to solidify and celebrate Asian Americans as members of American society and acknowledge their significant contributions. Five decades later, the APIDA community still draws inspiration from these sentiments and champions similar causes like representation and recognition.

May was specifically chosen to acknowledge two significant events in the history of Asian Americans. On May 7, 1843, the first Japanese immigrants came to the United States, and May 10, 1869, marked the completion of the first transcontinental railroad, which was pioneered by Chinese immigrants.

In 1992, the holiday was expanded from a week to an entire month to commemorate past and current struggles of the APIDA community, pay tribute to activists and trailblazers, and recognize triumphs of fighting for representation across political, academic and entertainment sectors. 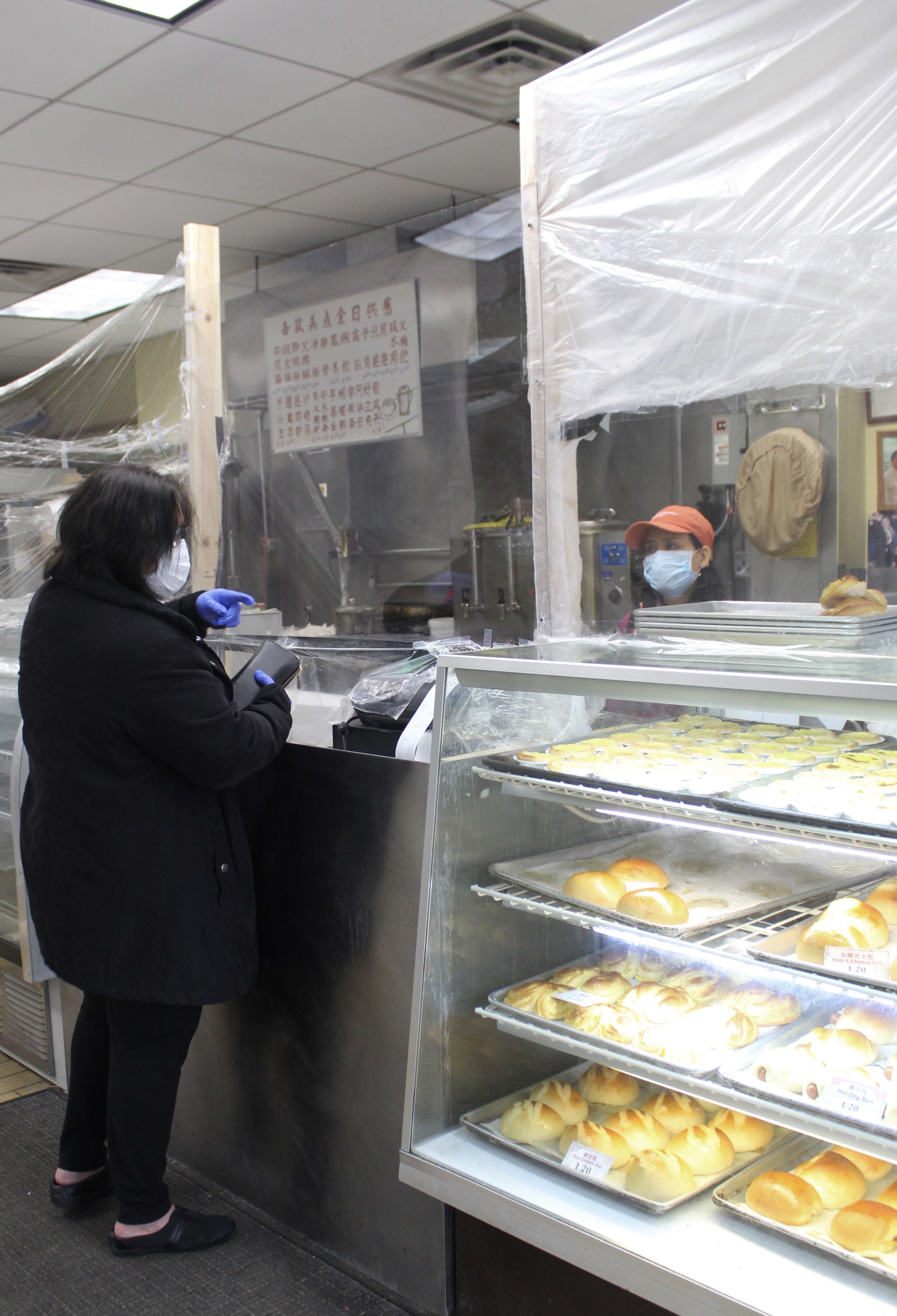 A worker waits for the customer’s order at Chi Quon Bakery in “Little  Vietnam,” a North  Side neighborhood known for its rich APIDA community. Jessica Nalupta, 14 East.

DePaul’s APIDA members said this memorialization comes after decades’ worth of labor and hardship –  citing alienation caused by the Chinese Exclusion Act of 1882, internment of Japanese Americans during World War II and the ongoing plight of indigenous folks to keep their lands and sovereignties.

“The leadership team of the APIDA Cultural Center [thinks this theme] encompasses the realities, emotions and spirits of the APIDA community at DePaul,” Long said.

Long reveals that she finds the “Amplify” theme fitting particularly because of experiences in the past few months. Long said the APIDA community experienced “two incidents of cultural appropriation” since the beginning of 2020 — making it critical to amplify APIDA voices.

In February, APIDA Sisterhood Uprising (ASU), a student club for APIDA-identifying women, transgender and nonbinary individuals, wrote a petition directed to DePaul’s head of Campus Recreation, who spearheads DePaul Men’s Ultimate Club (DUC). According to the petition, the team had “used a part of Japanese culture as an aesthetic to profit off of [Japanese culture], literally selling the hats [and jerseys] to the general public for $23,” which ASU found appropriative.

Earlier this year, the sporting team showcased its new designs by posting them on its public Instagram account. The design showed the word ‘duck’ in katakana, a Japanese alphabet, to represent its acronym DUC.

To combat these experiences, which they felt to be appropriative, Le mobilized ASU, a club she co-founded with Caroline Yu.

A week after releasing the petition and gaining 566 signatures, DUC revoked its merchandise. DUC said in a statement that they decided to revoke the uniforms after seeing the petition.

“We saw that our uniform had hurt and offended the APIDA community at DePaul and that was not our intention,” the statement read. “…We recognize the mistake we made and are grateful to have learned from this experience.”

“What the university was not ready for was how the APIDA community disrupted notions of the model-minority myth and organized each other and the greater university community,” Long said. “[We’ve taken] a stance against racism and appropriation and demanded action.”

The global pandemic and this incident didn’t stop the APIDA community from celebrating APIDA Heritage Month. Although they couldn’t physically gather to commemorate their achievements and advocate for their struggles through protests like they had done in past years, they held events via Zoom, like many other DePaul groups.

Long, alongside the Office of Multicultural Student Success, has been planning for months to welcome educators, activists and artists to help kick off the celebration.

Although plans had to change quickly after events were moved online, they still carried on.

“We knew we had to pivot many of our programmings and opportunities of engagement online,” Long said. “[This is] to provide rich virtual events that honor the story, resilience and history of the diasporic APIDA community.”

To support the larger APIDA community, Long and her team also collected a series of free events happening from coast to coast throughout May and shared them with students through their newsletter and social media. This included watching the inaugural PBS docu-series Asian Americans, using Netflix Watch Party to recognize pivotal moments of APIDA representation, sharing meals together like a mukbang and contributing art to a collective zine. 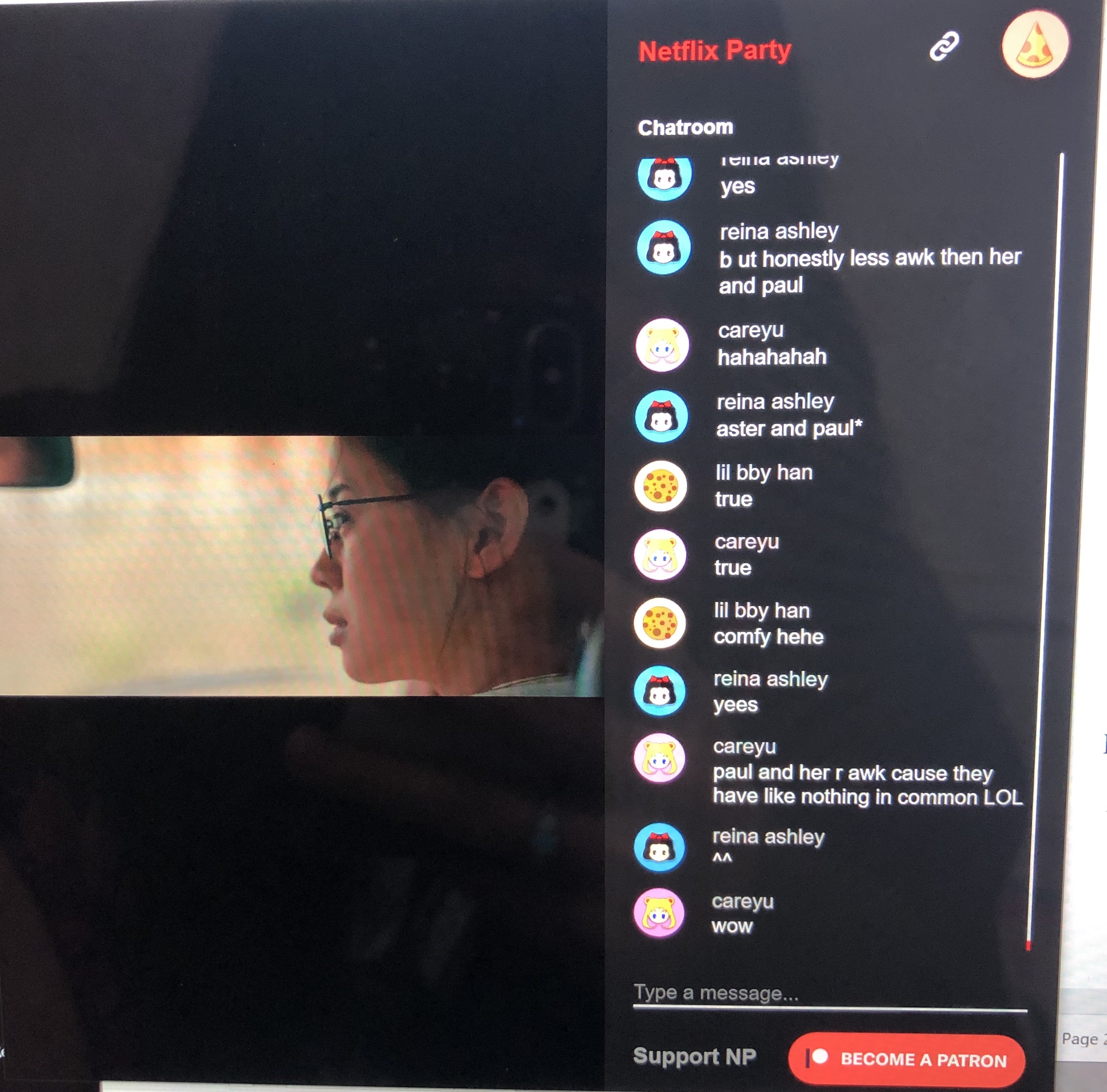 Friends message each other while watching Netflix’s The Half of It. Photo by Tuyet Anh Le.

Sophomore Geri Palillo is grateful for the accessibility of these events. Palillo is on the executive board for DePaul’s Asian Cultural Exchange (ACE) and DePaul’s first ever Philippine student association, KALAHI, meaning “of the same lineage” in Filipino. Through these roles, she helps in creating and maintaining spaces for APIDA students to meet and collaborate.

“I try my best to be aware and attend the online events,” Palillo said. “If I can’t go, I’ll share the details for others that may be interested.”

Palillo is used to thinking outside the box to meet remotely. KALAHI hosted a Zoom cooking class where attendees learned how to make the Filipino dish chicken and vegetarian adobo. 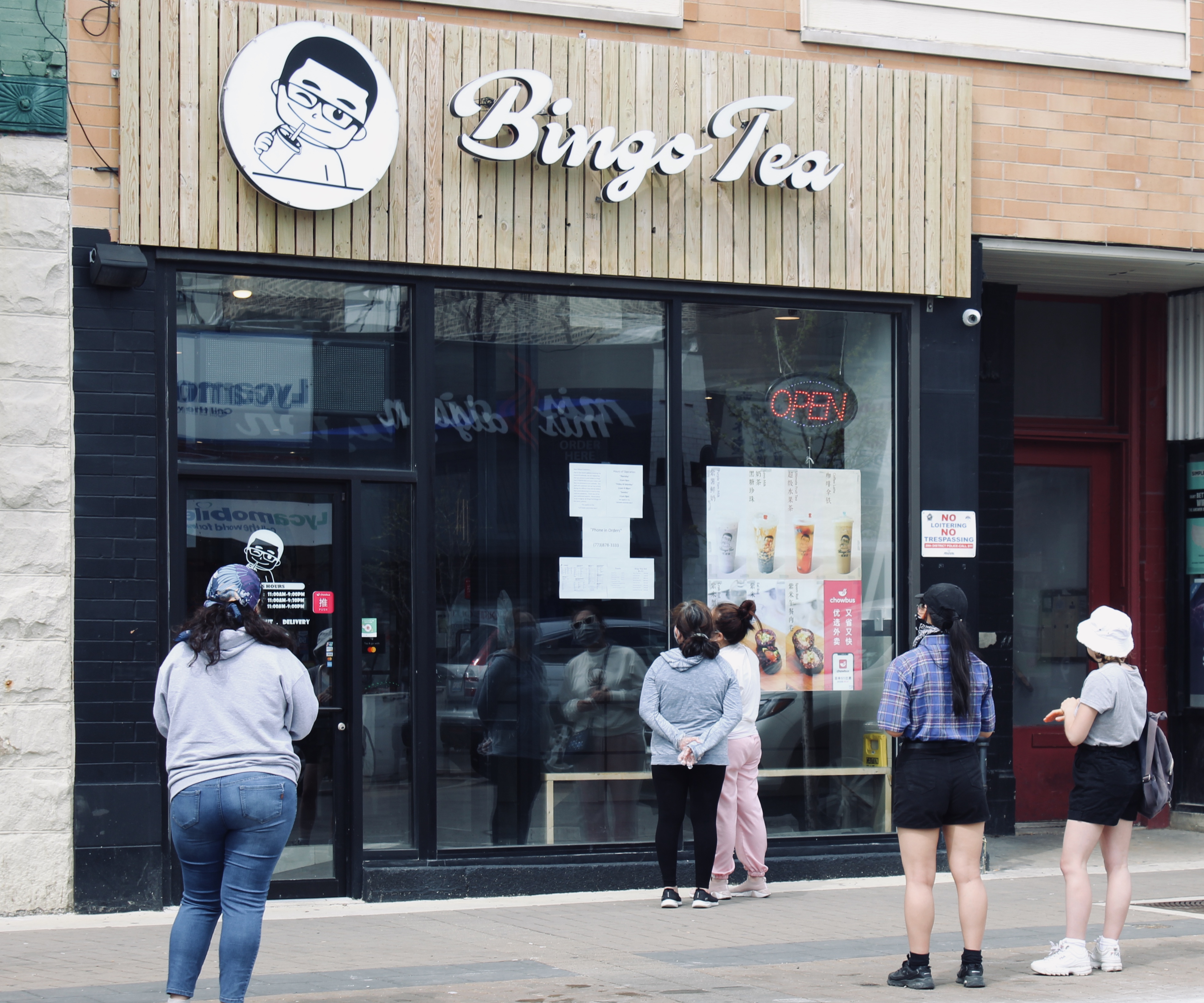 Le, a certified supporter of the APIDA Cultural Center, said she felt nostalgic about past events.

“I remember attending all of the different workshops that the center hosted last year including the APIDA Heritage Month: Grace Lee Boggs Brunch,” Le said. “That event was so special and fun because it was a gathering to recognize APIDA students at DePaul and the legacy of Grace Lee Boggs.”

The brunch recognizes the work of Boggs, a Chinese American activist, writer and APIDA icon, primarily known for spending much of her life advocating for civil and labor rights. The brunch is organized to bring members of the DePaul community to celebrate APIDA activists (like Boggs) and initiate conversation about contemporary relevant issues.

Despite being in the stay-at-home order, Long and her team wanted to push through with this annual tradition. This year, like everything else, the brunch took place via Zoom instead of Cortelyou Commons.

Celebrating online hasn’t come without its challenges. As all types of programming transitioned online, Le has found it more taxing to stay plugged in and engaged.

“In my personal experience, it’s been harder doing it over Zoom because I have to put in a lot of social and even physical labor to be in front of a screen for hours,” Le said. “It’s also more awkward because you can barely pick up on social cues and accidentally interrupt people while talking.”

Being an APIDA student leader, Le also finds it harder to disseminate information about her club’s events. Nowadays, she resorts to texting and sending emails, when before she would just bump into her members at the APIDA Cultural Center and invite them in person.

Although there are challenges to celebrating this year, Le appreciates the efforts of the APIDA Cultural Center.

“I think it is cool to see all the programming going on,” Le said. “At least we have the opportunity to engage if we want as compared to being alone in isolation.”

As an effort to contribute, Le hosted DePaul’s most recent CHA(I) Time on May 28 to close off APIDA Heritage Month through a virtual open mic poetry reading.

The center launched CHA(I) Time when remote learning started. The event aims to center human connections and community care while practicing social distancing.  The quarter-long series has ranged in events such as a Desi makeup tutorial, learning a K-pop dance choreography, playing an Asian American edition of Quiplash and discussing how to prepare for Ramadan.

Le is proud of her community’s active participation and resilience.

“ASU worked really hard this past quarter in organizing around issues that were impacting our community,” Le said. “We care for and love each other, honor and learn about our histories, hold space for each other and fight for our own community with other communities.”

The fight continues in light of COVID-19.

Mansi Kathuria, senior organizer at Asian Americans Advancing Justice-Chicago, hopes that individuals see an increase in racism as a call to organize and are taking action.

Kathuria added that although Asian American communities are being uniquely impacted by the xenophobia of this particular moment, all low-income individuals, essential workers and communities of color are being devastated by the pandemic.

“The bare minimum is pushing back when you hear anti-Asian and anti-Chinese sentiments,” Kathuria said. “[Be] an active bystander if you notice somebody experiencing anything from a microaggression to a hate crime in public.”