COMMENTARY: The Issue of LGBTQ Coverage in Newsroo...

COMMENTARY: The Issue of LGBTQ Coverage in Newsrooms 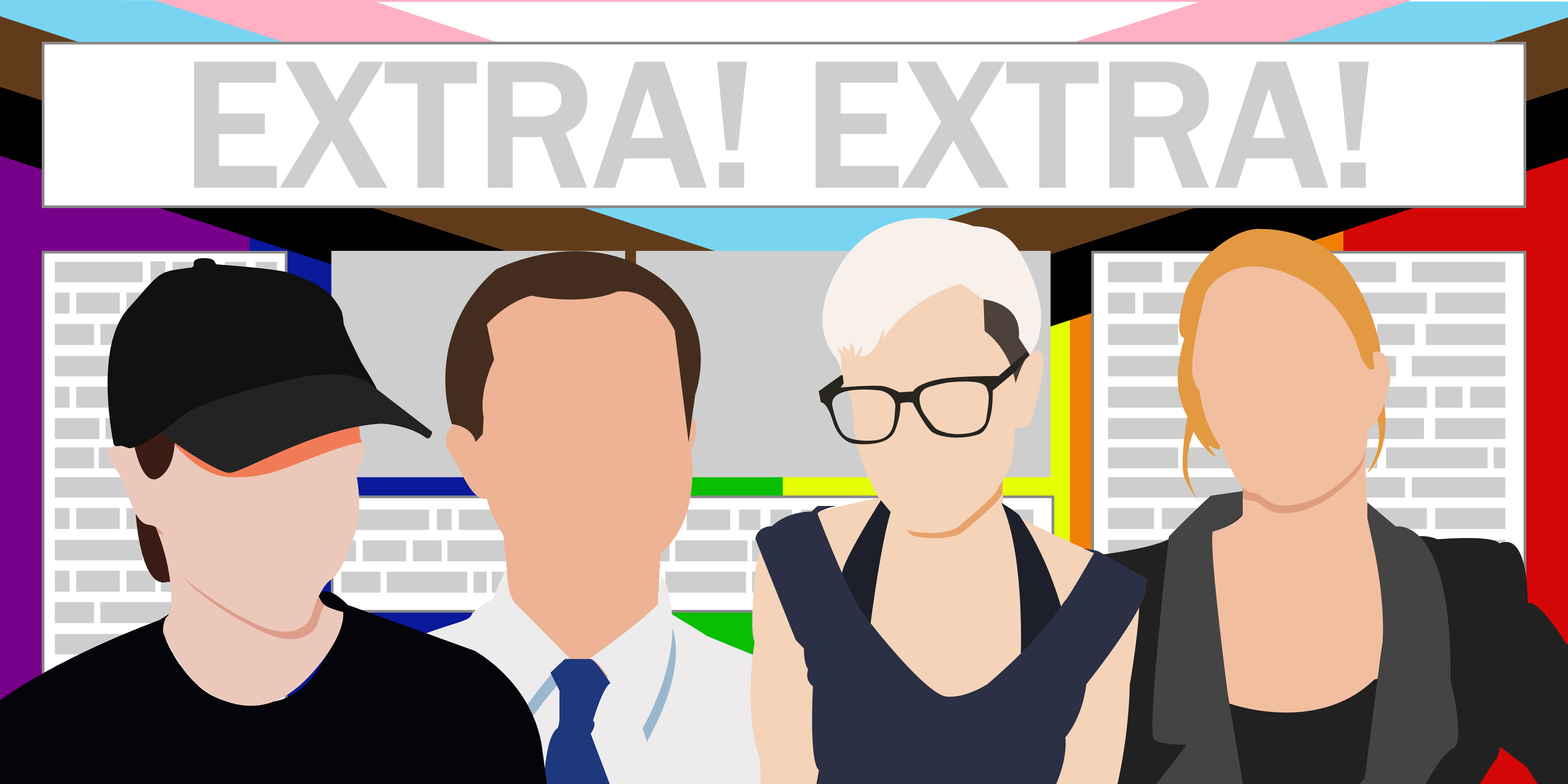 In 1966, Time published an essay titled “The Homosexual in America,” which closed with the following statement:

“[Homosexuality] is a pathetic little second-rate substitute for reality, a pitiable flight from life. As such it deserves fairness, compassion, understanding and, when possible, treatment. But it deserves no encouragement, no glamorization, no rationalization, no fake status as minority martyrdom, no sophistry about simple differences in taste — and, above all, no pretense that it is anything but a pernicious sickness.”

In the 55 years since the article was published, LGBTQ rights have expanded exponentially. Gay marriage was legalized by the Supreme Court in 2015, the 1964 Civil Rights Act was expanded to include gay and transgender people from workplace discrimination in 2020 and Pete Buttigieg made headlines as the first openly gay Cabinet member this year.

Yet, in July 2021, following the end of another pride month, American journalism is still plagued by a failure to adequately cover the LGBTQ community. While drastic improvements have been made since 1966, the LGBTQ community is still misunderstood in many newsrooms, falling prey to editorial practices resulting in misrepresentation and harm.

The Trans Journalists Association (TJA) was founded in June 2020 to combat shortfalls in the coverage of the transgender community in journalism to fight harmful practices such as misgendering and “deadnaming,” which is when a trans person is called by their birth name rather than their chosen name.

Oliver-Ash Kleine, a senior producer for the podcast “The Anti-Trans Hate Machine,” was one of the founding members of the TJA. Over their time in news, they experienced how editors and fellow colleagues would argue and disregard their pleas for accurate coverage of trans individuals.

NBC Out, an arm of NBC News which focuses on LGBTQ coverage, tweeted a post deadnaming Elliot Page in an announcement of Page’s coming out as trans in December 2020. NBC Out defended themselves by saying that their decision to deadname came from careful consideration of GLAAD’s advice for reporting on trans celebrities, but Kleine disagreed, retweeting a post from the TJA saying there was never a reason for a deadname to be published. (GLAAD’s mission is to advocate for better coverage of the LGBTQ community in the news.)

Kleine was backed up by Jo Yurcaba, a reporter from NBC Out, who reiterated that there was never a reason to use a deadname.

This story by @brittneymac15 doesn't use a deadname. It's that easy. https://t.co/UKCjkmrEkb

Outside of the trans community, Leigh Ann Carey, a freelance journalist and former online strategy leader for the LGBTQ and woman-led online strategy agency BRAVE, published a piece in 2019 for Columbia Journalism Review analyzing coverage of gay political figures such as Pete Buttigieg and Mayor Lori Lightfoot, calling foul on homophobic microaggressions present in the verbiage of articles about them. Carey highlighted how coverage of political candidates who are members of the LGBTQ community often place their identities at the forefront of the story — not their platform as a candidate.

For example, in an interview between Alexandra Jaffe, political reporter for The Associated Press, and Buttigieg, Jaffe asked Buttigieg if he considered himself “gay enough,” a question that Carey saw as “clumsily worded.”

The question was intended to garner a response from Buttigieg about a piece by The New Republic equating Buttigieg to a gay Uncle Tom, which has since been taken down. However, per Carey, it put too much of the attention on Buttigieg’s sexual identity, rather than the issue at hand — his ability and plan to bring positive changes regarding racial justice.

I asked Pete Buttigieg about the controversial TNR piece that compared him to a gay Uncle Tom. He said he was glad it was taken down and pivoted to Pence touring border facilities. pic.twitter.com/zATNz22aQA

In 2019, freelance writer Christine Hannigan published a firsthand account in The Guardian of the mishandling of a story involving a photo of her and her date, Melania Geymonat. The two survived a homophobic attack on a London bus, and the story, along with a photo of the duo covered in blood, began to make waves across the media.

In her piece, Hannigan expressed her discomfort with the photograph being blasted over international media without her permission. It left her feeling like “cheap clickbait,” she said. Furthermore, her sexuality was misrepresented as lesbian instead of bisexual.

During a time when the fight for LGBTQ equality is making strides, why is coverage of the LGBTQ community still fraught with misrepresentations?

“It is difficult for us to get jobs in the first place, and when we do, we’re often not supported. We’re almost always the only trans person in the room, and almost never see editors or other newsroom leadership who are trans.”

When Chelsea Manning, former U.S. Army intelligence analyst and whistleblower, came out as trans eight years ago, Kleine was working in public radio when they noticed that the newsroom’s coverage was misgendering Manning. For an hour, Kleine struggled with their news director to change how Manning’s story was being covered. As a result, the newsroom decided that they wouldn’t begin using the appropriate pronouns for Manning, but would stop using pronouns overall, which temporarily — though not ideally — ended the issue of misgendering.

The triumph was short-lived, though, as the anchor took it upon himself to change the script to misgender Manning when the story aired.

Over their time as a journalist, Kleine has received significant pushback against their pitches for stories focused on trans voices. In 2017, Kleine accepted their own trans identity, which only added an additional layer to struggles with their advocacy for trans coverage. On top of still struggling to pitch trans stories, Kleine began to face additional concern over whether their trans identity negatively impacted the way their colleagues perceived them.

Cathy Renna, former GLAAD executive, in an interview with AP News, said, “The vast majority of journalists are not homophobic,” she said. “They’re homo-ignorant.”

Renna explains “homo-ignorance,” as opposed to “homophobia,” as lackluster LGBTQ representation that diplays misunderstanding and disconnect between the reporter and the LGTBQ community, rather than blatant displays of hate.

For example, Renna points towards the use of the phrase “sexual preference” over “sexual orientation” as something which, though not a direct attack on the LGBTQ community, falls short of good representation. Per Renna, “sexual preference” implies a choice made by LGBTQ individuals with whom they date; whereas “sexual orientation” more accurately reflects how being gay is not a choice.

The late Steve Buttry, former student media director at Louisiana State University, published a blog post in 2013 describing ways in which newsrooms can improve their understanding of the gay community to fight this ignorance.

Also if your newsroom is scrambling maybe you should, uh, hire more trans folks.

However, in a world where “watching news” often means consuming stories that have mishandled LGBTQ identities and where people like Kleine are forced to overcome hurdles in enacting change with LGBTQ coverage, these suggestions are only a start.

“The way journalists write about trans people reflects how they think about us and is an indication of another problem too many of us know to be true: most newsrooms are, at best, unwelcoming to trans people and are all too often hostile work environments,” wrote Kleine.

“This hostility helps explain why so few trans people have full time work in our industry. It is difficult for us to get jobs in the first place, and when we do, we’re often not supported. We’re almost always the only trans person in the room, and almost never see editors or other newsroom leadership who are trans.”

To help address this issue, the TJA published a “For Employers” page on their website, under which are two guides focused on policies and office culture.

“Best Practices for Trans-Friendly Workplace Policies,” gives recommendations for how workplaces can build a safe environment where trans people and other members of the LGBTQ community can flourish, one being to provide education on trans issues in every newsroom, even those that do not employ any trans reporters.

The second resource, “A Guide for Supporting Employees Coming Out as Transgender,” focuses on how employers can support their trans employees on an individual level through establishing workplace guidelines for reprimanding transphobia, communicating with the employee to determine their individual needs and updating records as needed after the employee transitions.

In 2016, Sue Robinson, a journalism professor at University of Wisconsin-Madison and author of “Networked News, Racial Divides: How Power and Privilege Shape Public Discourse in Progressive Communities,” published a list of guidelines for newsrooms seeking to become more inclusive and representative in their reporting. Among her suggestions is for newsrooms to “provide social justice/privilege/cultural relevancy training for every reporter and editor in the newsroom, individually and/or as part of newsroom activities” and for journalists to “understand the history of your community, journalistic specialty or beat in terms of marginalized communities.”

Nicholas Clairmont, a contributor to Washington Examiner Magazine and associate editor to Arc Digital, wrote an opinion piece in 2019 for Washington Examiner exploring the ways in which a post-marriage equality America that is seeing more legal triumphs in LGBTQ cases has become blind to the ongoing discrimination LGBTQ individuals still face on a day to day basis. He concludes with the following statement:

“I hope one day gayness can be a matter of mere apathy, but it’s too soon after the culture shifted to stop feeling protective of what is still a fragile cultural consensus. For now, though it doesn’t matter in the largest moral sense whether somebody is gay or straight, being gay is not something people have the luxury of not caring about. It is something for which they must fight, and unfortunately fight on all sides.”

Accomplishments made in the fight for gay rights should be celebrated as milestones towards equality, but shouldn’t negate the ways in which the LGBTQ community continues to fight for representation and battles discrimination in the cisgendered, heteronormative hegemony present in America. Even Pride Month is both an acknowledgement of the progress made in LGBTQ rights but also an annual reminder for institutions such as journalism of the barriers remaining in the way of achieving full equality and respect.

Editor’s note: This piece was inspired by an earlier blog post written by the author which focused on journalism coverage of trans people’s stories. You can read that version here.