Why They Walked Out: CPS Stude.. 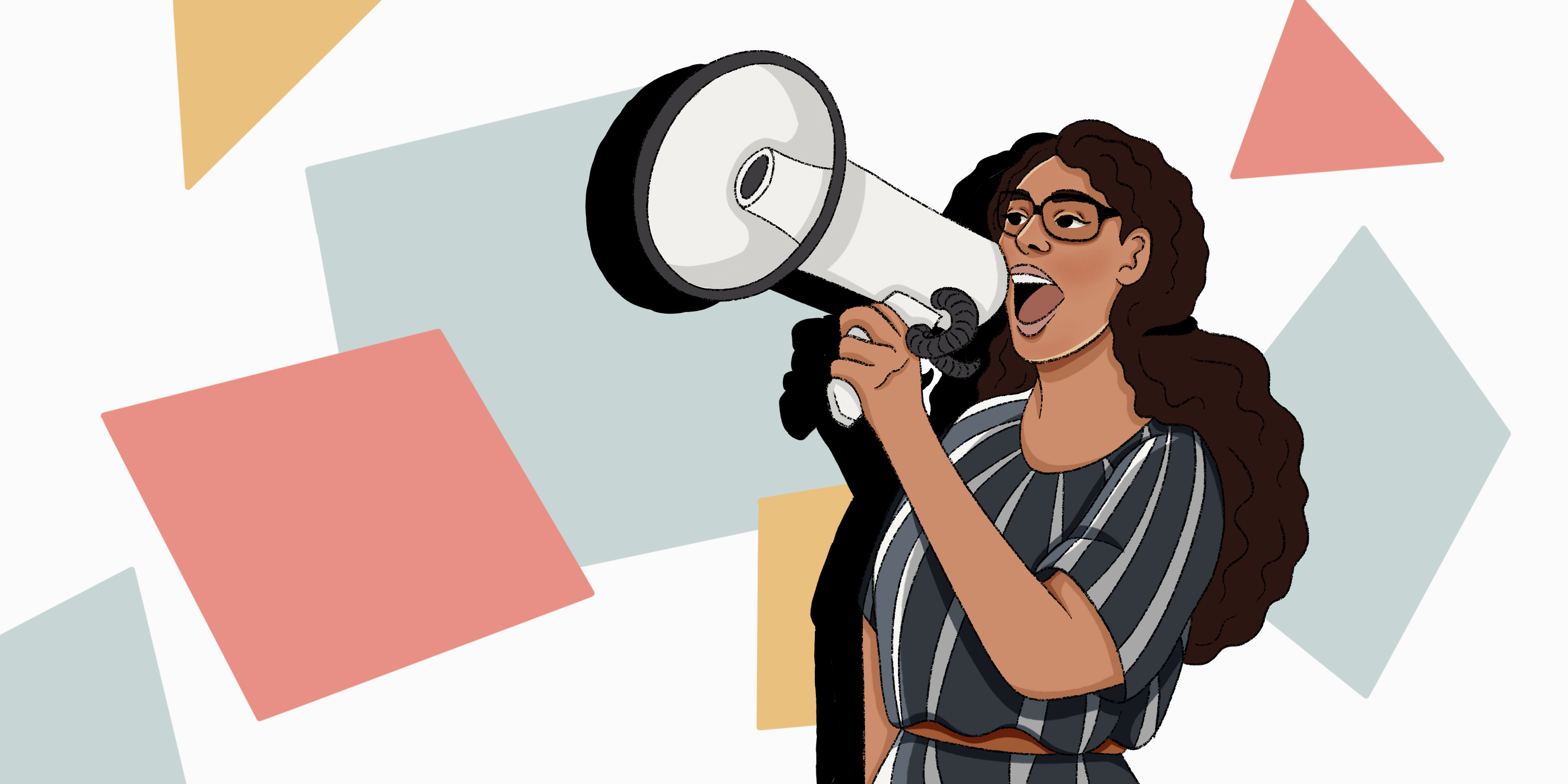 It was lobby day in Springfield and Christina Rivers was lost. She meandered the Illinois statehouse trying not to get swept into the bustle of staffers, lobbyists and legislators rushing around.

At last, she caught a glimpse of her former student, then 22-year-old Alex Boutros, making her rounds chatting with legislators and staff in their offices. She was busy wrestling support for the civics-in-prison legislation she had spent months drafting.

“Some of the staff that we talked to seemed skeptical, others seemed open, others seemed kind of too busy to care,” Rivers said. “But to watch her pivot between all these different personalities — she’s a natural.”

For Rivers, a DePaul University professor of political science, the lobbying process had always seemed fishy. Big money, big interests and detachment from people actually impacted by legislation came to her mind. But while watching Boutros converse with representatives and staffers from across the state, she saw something magical unfold.

Boutros, a 2018 DePaul graduate, had recently landed a full-time job with Chicago Votes, a nonprofit dedicated to expanding voting access to incarcerated people through outreach, organizing, drafting legislation and lobbying — what she was doing that day in the state capitol.

But her reason for lobbying began before her position as community organizing manager. It began an hour southwest of DePaul’s Lincoln Park campus, behind barbed wire, iron bars and concrete at Stateville Correctional Center in Crest Hill, Illinois. She’d spent years in conversation with people incarcerated at Stateville, lawyers, voter-protection organizations and state representatives to draft and get her bills to the floor of the Illinois statehouse.

“But to watch her pivot between all these different personalities — she’s a natural.”

A transplant from the suburbs of Detroit, Boutros jumped into the deep end of community organizing in 2014 as a freshman at DePaul. She juggled volunteering with food justice organizations, internships with state legislators and the Chicago Lawyers’ Committee for Civil Rights. Boutros found her footing in Chicago activism by knocking doors and talking to community members with various organizations.

In 2017, she founded DePaul’s chapter of Students Against Incarceration, a group dedicated to advocating for incarcerated people and educating the DePaul community about the legal system. Boutros championed the Ban the Box campaign, aimed at eliminating questions of criminal record from DePaul’s admissions process. Katrina Phidd, her successor as president of the club, credits her leadership with the group’s vitality today.

“She was integral in mentoring me as a young organizer, and like [showed me] the steps needed to take to even carry out any sort of campaign,” Phidd said. “I learned from her how to find your targets, different strategies to use … and how to get students in the room.”

Today, Phidd appreciates Boutros for helping her on her path, as she now works closely with her as Chicago Votes’ communications and digital strategy manager.

Inspired by her Unitarian Universalist upbringing and a conversation with a prison minister, Boutros wanted to work with incarcerated people. Visiting Stateville Correctional Center with Rivers’ Law, Politics and Mass Incarceration class in 2016 was formative for her.

“These human beings are amazing human beings who have been forgotten about and literally disregarded and disposed of,” Boutros said. “It was ridiculous because they are some of the most brilliant people I’ve ever met.”

It was during her very first visit to Stateville that Boutros decided to keep showing up for her classmates behind bars and all other people incarcerated in Illinois.

“And that was very much like, ‘I’m never gonna stop doing work around prisons because there’s just too many people in here,’” Boutros said. “And it’s just too connected to everything.”

For much of her time at DePaul, Boutros and Rivers continued to visit Stateville almost every Friday. She cultivated important relationships with her classmates on the inside that have endured since graduation.

“These human beings are amazing human beings who have been forgotten about and literally disregarded and disposed of. It was ridiculous because they are some of the most brilliant people I’ve ever met.”

“She is beloved amongst the guys who are still there,” Rivers said. “She’s like their collective little sister.”

On those Fridays at Stateville, she and her classmates talked about vulnerable subjects and strategized for their final class project — a policy proposal concerning incarcerated people. They decided to counter the narrative that incarcerated and formerly incarcerated people are apathetic about voting and civic engagement.

“I did really just take the chance to actually understand who these people were in my class and their backgrounds and what they care about,” Boutros said.

She found the problem wasn’t apathy — it was lack of accessible information. Incarcerated people were so far removed from their rights and responsibilities on the outside that when they are released, voting is often the last thing on their minds. No prison exit programming in the state of Illinois mentioned voting or civic engagement. So, they got to work on their project.

“[It] turned into a civics in prison bill that mandated Illinois provide peer-taught civics classes to people before they get out of prison,” Boutros said. “That law was co-written with our folks that are currently incarcerated.”

This final project became the Reentering Citizens Civic Education Act. It’s a point of pride for Boutros that the bill includes the deputization of peer educators, other people who are incarcerated, to provide this education.

Her work on the bill was far from over when she graduated and landed a job at Chicago Votes. From there, she brought in the necessary political heavy hitters to bring their project to the state legislature. She looped in Chicago Votes to help lobby, the Chicago Lawyers’ Committee for Civil Rights to advise on language and Representative Sonya Harper, for whom she had previously interned, as a sponsor.

“[Boutros] was the glue, in many respects, behind a lot of this legislation,” Rivers said. 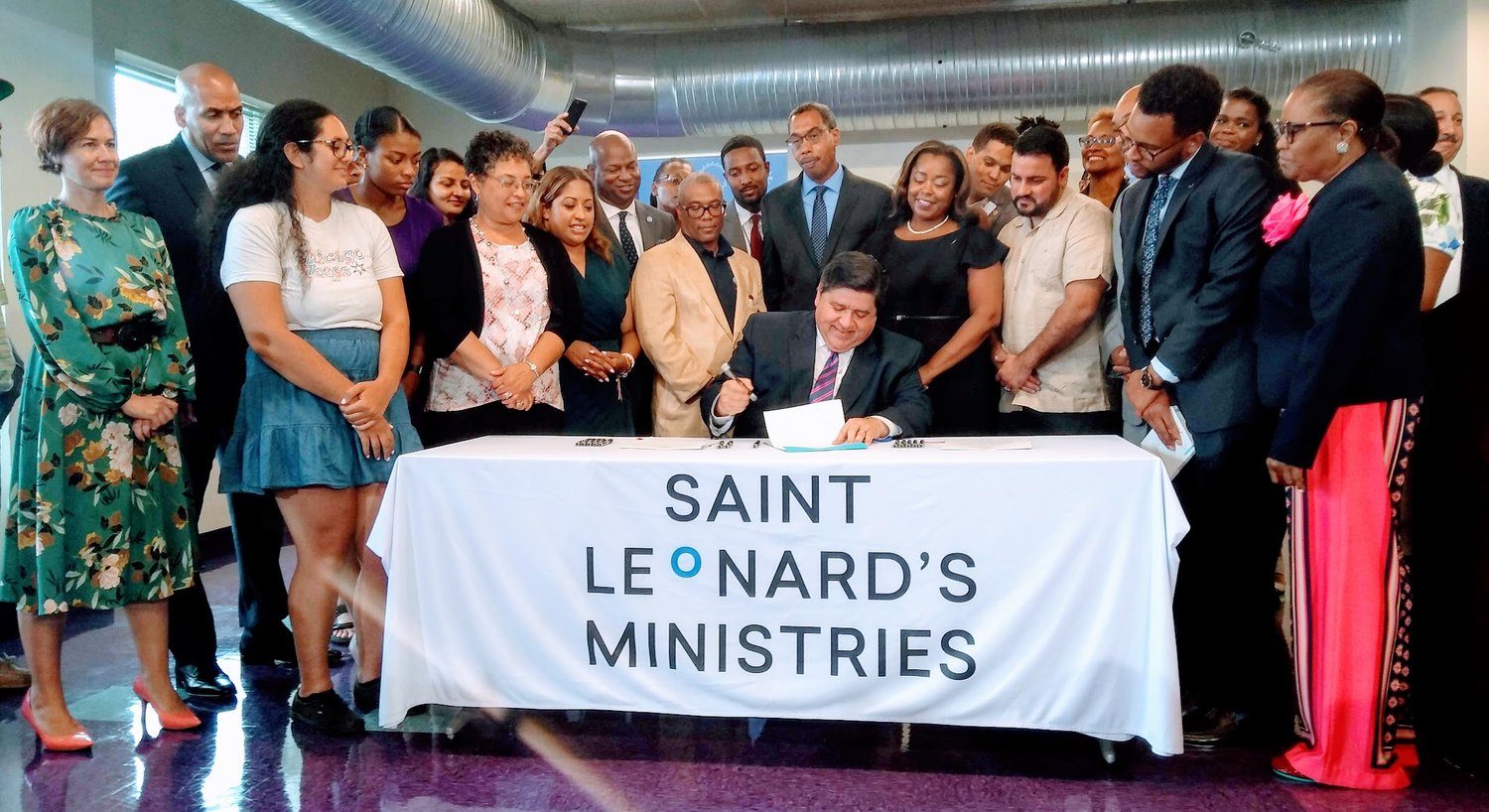 Photo Courtesy of the Chicago Lawyers’ Committee for Civil Rights

Together, the coalition and co-sponsoring legislators joined Governor JB Pritzker on Aug. 21, 2019, as he signed the Reentering Citizens Civic Education Act into law. Although their partners incarcerated in Stateville couldn’t be there, to the governor’s right stood Boutros and Rivers, smiling.

But in her line of advocacy, victories can feel few and far between. Her DePaul Ban the Box campaign stalled. A bill she penned died in the statehouse last session despite being expected to pass.

January 18 marked the beginning of the 2022 legislative session. Boutros and her Chicago Votes team are focused on passing Senate Bill 828, which would grant all people incarcerated in Illinois jails and prisons the right to vote. From building a coalition of supportive faith leaders across Chicago to lobbying in Springfield, this session’s outreach is just beginning. With a shortened legislative session due to COVID-19 cancellations, she has her work cut out for her.

But Boutros is rarely discouraged.

“It’s just so instilled and inherent in her that she knows a better future is possible,” Phidd said. “She’s so humble and modest, but she’s good at organizing. The small wins keep you going  and I think that keeps her going as well.”