A Different Kind of Greek Life..

Why They Walked Out: CPS Students Take to the Stre...

Why They Walked Out: CPS Students Take to the Streets to Protest COVID-19 Safety in Schools

This piece contains interactive audio elements. Click highlighted text to hear on-the-ground audio and immerse yourself in the story.

Hundreds of Chicago Public Schools students across the city walked out of school last Friday to protest a lack of COVID-19 safety measures in their classrooms.

The youth gathered in front of CPS headquarters, brandishing homemade signs and distributing KN95 masks, along with a supply of snacks to keep everyone fed. Student organizers shouted their demands as others cheered in support. They then marched with arms linked onto the street, surrounding the intersection at Madison Street and State Street.

They chanted, “We want change.”

Meanwhile, five adults stood in the lobby of the building: two security guards and three dressed in business attire. They looked through the doors, emotionless, listening to hundreds of high school students chant “F—k Lori Lightfoot.”

At Kenwood Academy High School, it wasn’t your normal afternoon. Students typically transition between classes on Kenwood’s campus — between 12:39 p.m and 12:43 p.m — but that changed as students walked out of their 4th period classes when the clock struck 12:30 p.m. Yet as the time encroached upon them, dozens of students gathered and headed towards the foyer on the corner of Hyde Park Boulevard and South Harper Avenue. There awaited the attending students.

Holding signs and sequencing chants, students grasped the attention of both the school administration and the local neighbors. Passing cars and locals honked their horns and cheered on the group, who later dispersed in large groups toward nearby bus stops as officers began to force students off the school’s property.

“I feel like this is the only way to do it, is to not be at school, lower the attendance, and just show them that we actually care about our education and we want to be the conversation.”

“I’m out here today because, from the looks of it, they [CPS] don’t care for us as students and the people we have at home,” Amira, a Curie student, said. “And the fact that we have to worry about COVID, and our family getting COVID and everybody else getting COVID, we should have the choice to be online and in-person. That’s why such thing as hybrid exists.” 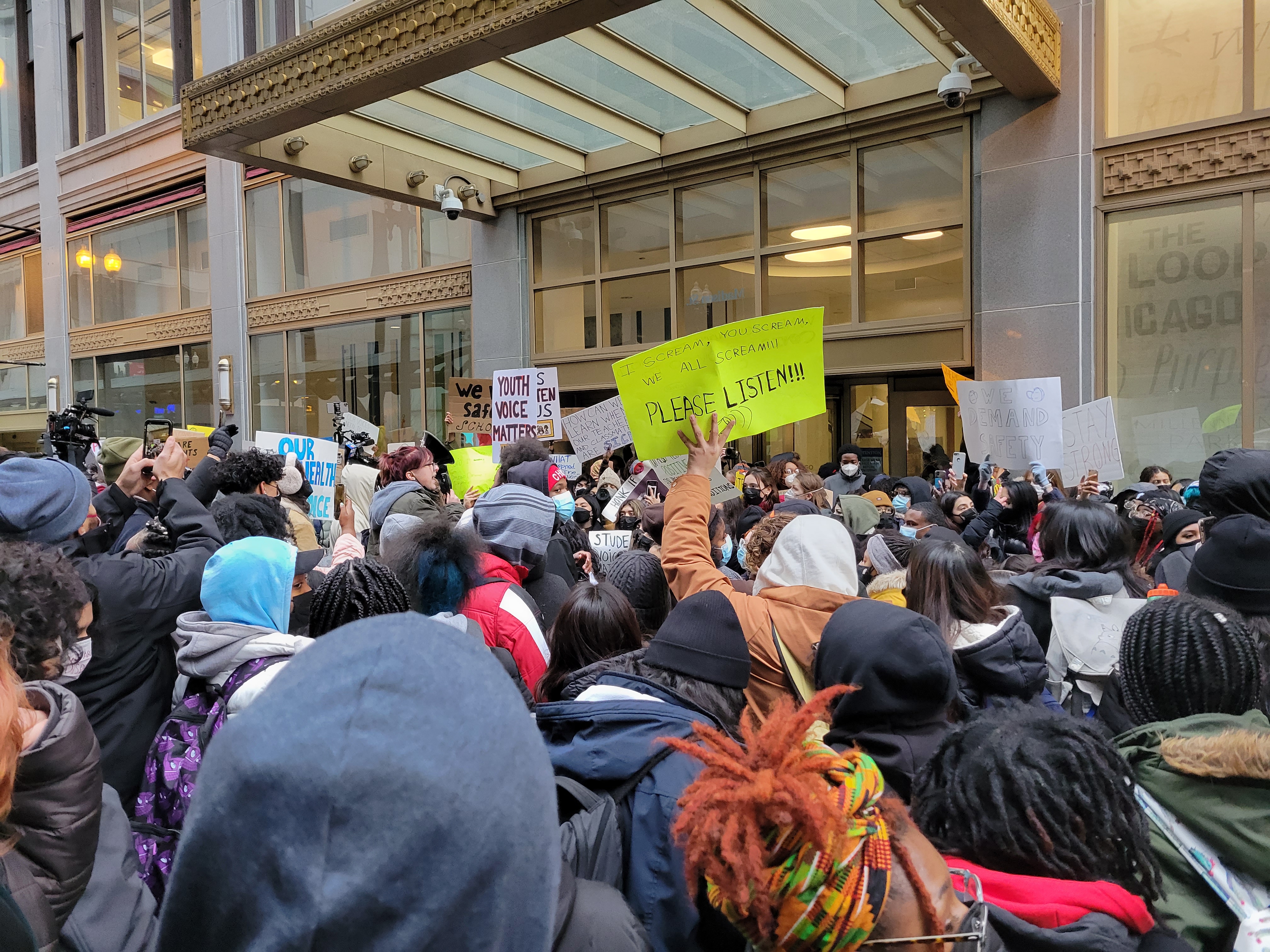 Students held signs and chanted in the Loop after walking out of their respective schools in protest of COVID-19 policies. Emily Soto, 14 East

A few faculty members spread out, some stepping onto the street, to direct traffic away from the growing crowd of frustrated students inching closer to the curb. They didn’t intervene. No one intervened.

To end the demonstration, approximately 50 students marched down Archer Avenue, continuing to chant before turning around to disperse. A small group made their way to the Pulaski train station to travel downtown for the rally.

At Back of the Yards College Preparatory High School, it was very quiet when students began walking out of the school. They all remained silent as they dispersed in different directions, with teachers and students inside the building watching from classroom windows. But through the silence, the voice of one student could be heard. It was Esme — guiding students who planned to attend the rally in the direction of the nearest ‘L’ station.

“We’re the ones experiencing this firsthand,” Esme said. “We’re the ones not getting these masks, the KN95 masks. We are the ones in these lunchrooms crammed, in these hallways crammed, with no proper safety guidelines or without the option of having to go remote … we see this chaos happening in schools, and that’s why they should listen to us.”

A group of about 25 students marched to the station with posters and signs saying, “students over profit” and “our voices matter.” 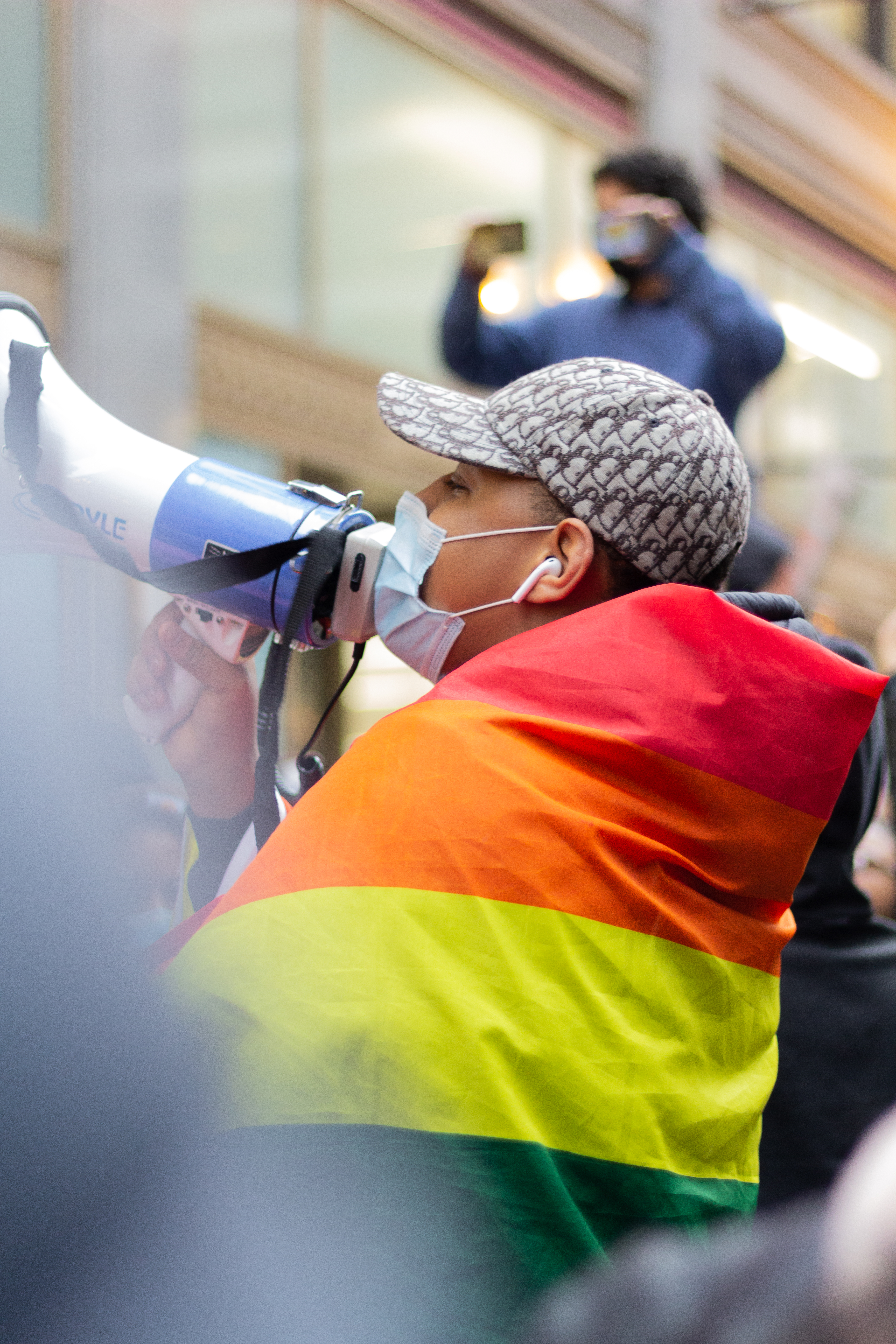 A student with a megaphone chanting in the Loop. Emily Soto, 14 East

“For them to think that our voices didn’t have a say in this? This is very disappointing,” she said.

Hundreds of students then gathered outside CPS headquarters. With chants, signs, dance and speeches from organizers, students demonstrated for safer COVID-19 learning conditions and inclusive conversations with top officials regarding the pandemic’s effect on their education. 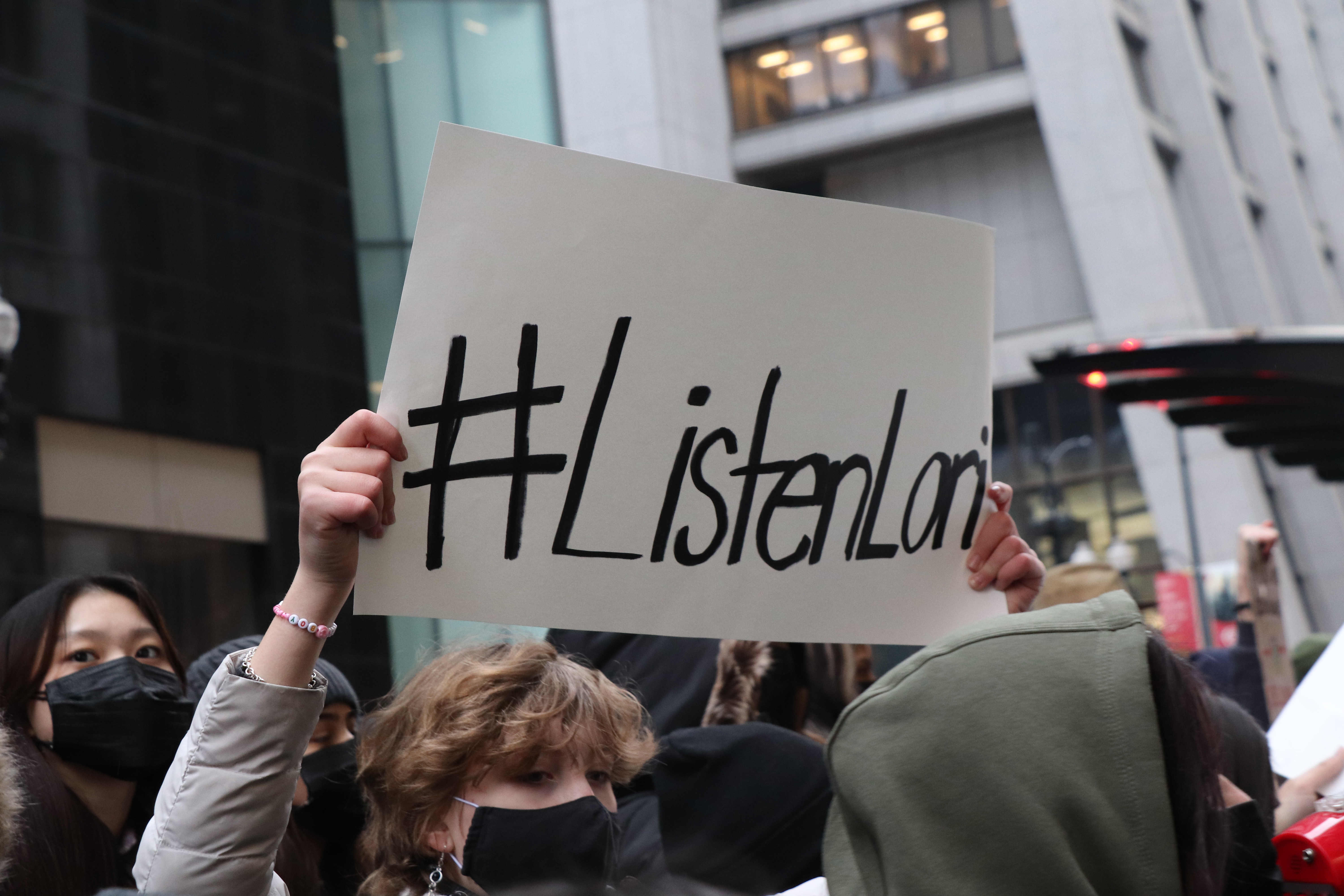 The list includes demands for transparency on CPS contract negotiations and COVID-19 data from the school district that doesn’t contradict the Chicago Department of Public Health, as well as an apology from Lightfoot.

a thread!!! 1/3chicago public school’s radical youth alliance has come forth with a list of demands that we believe is the bare minimum of things that @ChiPubSchools leadership can implement in response to the crises we have seen in our communities. pic.twitter.com/NTnLsmSHWg

“We’re calling for youth to have a place on the bargaining team to implement our needs, to accommodate our education to fit everybody. There is no reason why people who have immunocompromised people living in their homes are forced to be in person,” said Chi-RADS organizer Santi De La Garza during a speech at the rally.

As negotiations continued, the Chicago Teachers Union voted to reject teaching in-person at the beginning of the year, advocating for remote alternatives instead.

To return in person, CPS students and staff were required to take an at-home COVID-19 test. However, due to delayed shipping, thousands of samples were deemed invalid, leaving CTU to negotiate testing as part of its recent labor action. 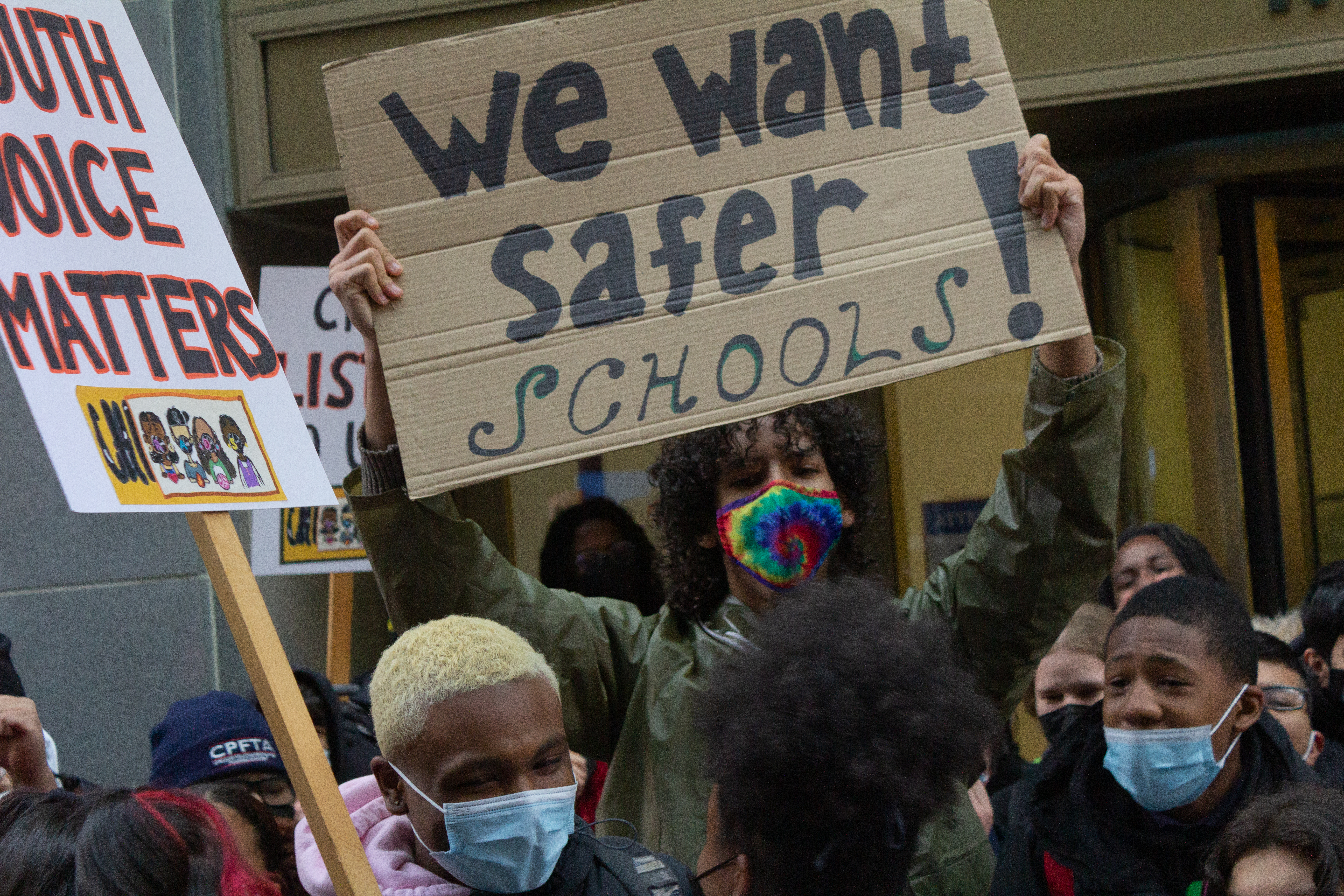 “I’m here to support our teachers and to advocate for stricter safety measures in schools. I think it’s really not cool that we can’t do virtual learning unless we actively have COVID because a lot of people are feeling unsafe right now or have been exposed and the new variant is just making everything way worse,” said Maya, a student at Whitney Young.

“CPS and Lori Lightfoot need to listen to teachers and students because we are the heart of Chicago Public Schools.”

“I’m here to support the teachers and because I think we need more safety protocols in schools, and Lori Lightfoot isn’t listening to that. I think w should have opt-out testing instead of opt-in testing so we’re getting accurate reads of numbers and that everyone should have access to KN95 masks so students who are immunocompromised aren’t forced to risk their lives when they’re coming to school.” Vivian Miltner, Whitney Young

A Seat At The Table

Friday’s rally was also a call for students to participate in conversations with the school district and other decision-makers.

Labor negotiations between CPS and CTU have historically been tense. This year Lightfoot called CTU’s vote an “illegal work stoppage,” and teachers were locked out of their school’s online accounts when attempting to work remotely. 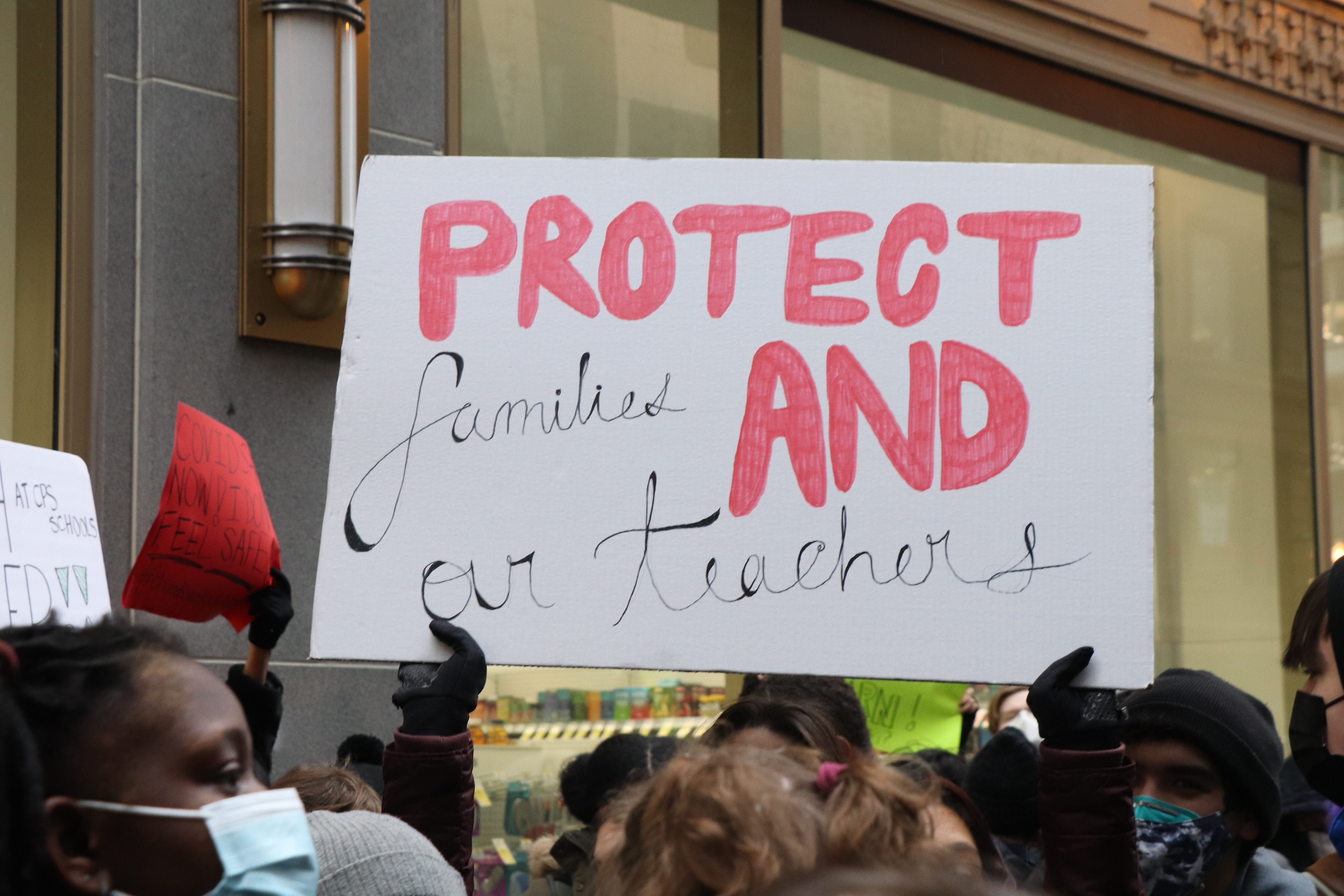 After reaching a safety agreement, CTU ended their labor dispute following a week without classes and students returned in person January 12, two days before their own walkouts.

“It’s completely unfair how some students are in danger of getting COVID, yet CPS is not really taking the precautions to protect these students,” said Diana Mena, a student at BOYCP. “I know a lot of students who are scared of getting COVID and have experienced some symptoms but came out negative. They were not given the choice to go virtual … they’re just completely behind on everything.”

Since then, Mayor Lightfoot and other officials haven’t directly responded to students. CPS released a statement saying, “School administrators will review the student concerns and work with the District to address them,” according to ABC 7. 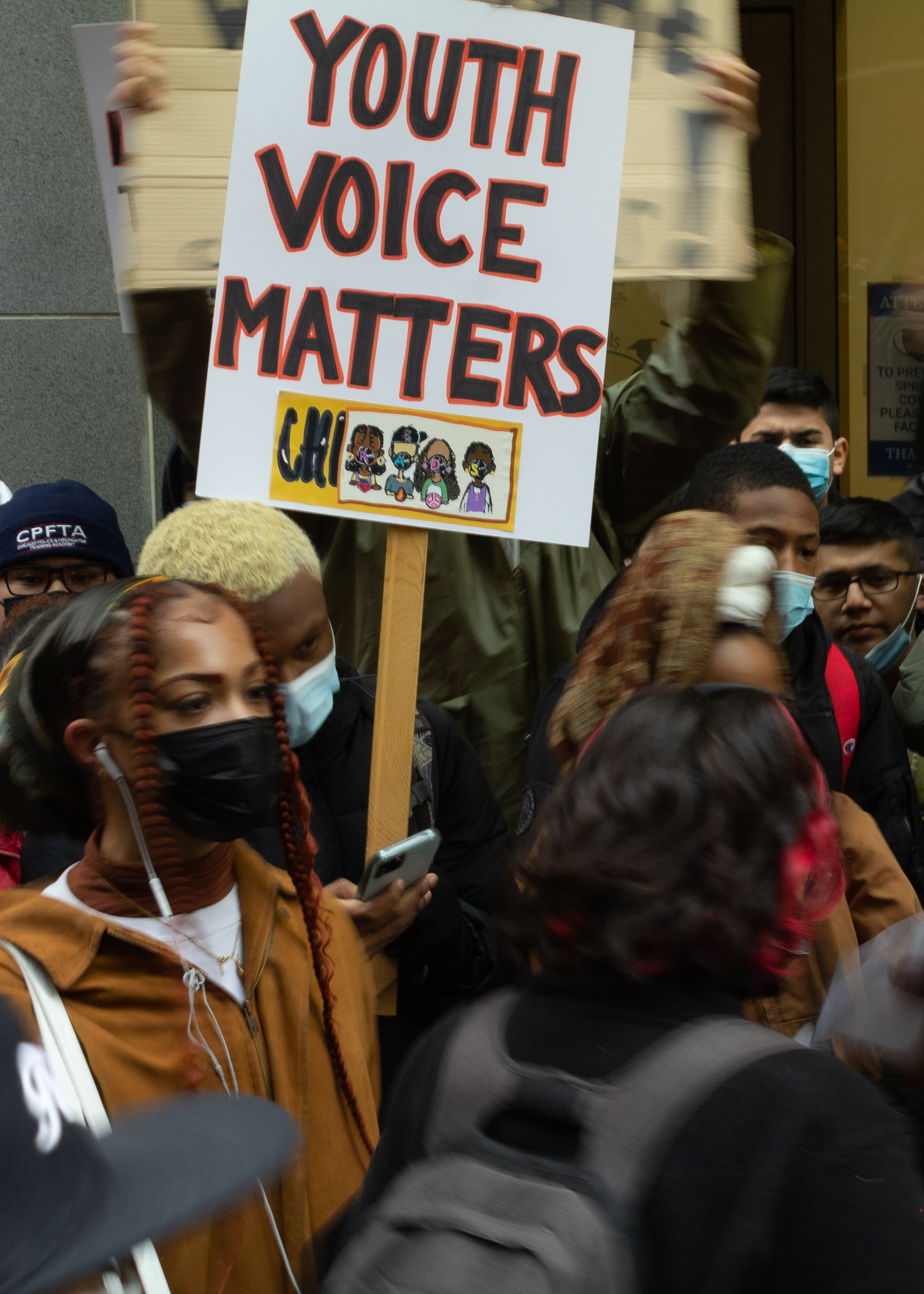 A sign held by a student outside CPS headquarters. Emily Soto, 14 East

As students and teachers were set to return to in-person classes, co-founder of Chi-RADS Catlyn Savado wrote an op-ed detailing a call for community support amid frustrations about rising COVID-19 test positivity rates.

“When it comes to returning back to school in the middle of a pandemic, no one has the one right answer. But I would like to observe that we are responding with the same demands and the same strategies we have been using to fight the system for the past two years,” Salvado wrote. “History repeats itself. The same things we have been demanding during these pandemic years are the same things CTU has been demanding for the past decade.”

In 2019, 14 East covered CTU’s two-week-long strike, in which students joined marches and led chants outside of City Hall, voicing their concerns with overcrowding and minimal support staff as youth organizers.

Nationally, other public school systems have done similar walkouts, including students in St. Paul, Brooklyn and Boston. These walkouts create a similar narrative: when students feel unsafe, they’ll make it impossible to be ignored.

Now — as thousands of CPS students remain in quarantine and Omicron reaches its peak in daily cases, test positivity rates and hospitalizations in the city — they’re making their opinions known and demanding more.