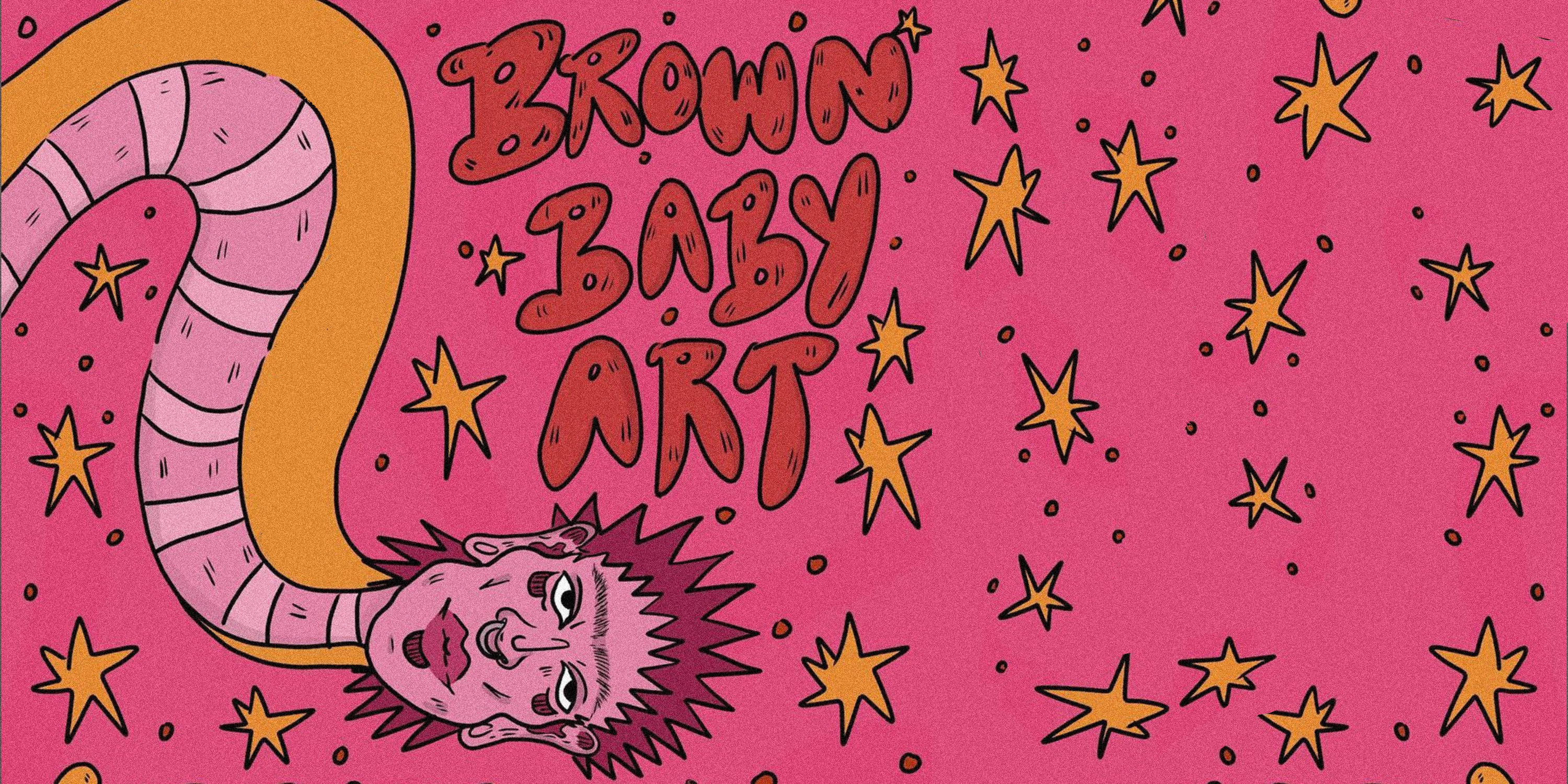 On October 22, the Spooky Art Market came to life in the Loop neighborhood of Chicago, bringing artists to showcase their jewelry, prints and paintings. The event was hosted by Brown Baby Art, a Chicago-based collective that curates space for queer people of color to promote their work and identity.

Brown Baby Art was founded by Jason Tumalan and Josslyn Baron in May 2021. The two met working at a thrift store together and they bounced ideas back and forth about how their collective was going to work. Their mission was to uplift queer diverse communities and provide them with a space to make profit and share resources with each other.

Jason Tumalan sits behind a display of his artwork at the Spooky Art Market on October 22. Photos by Monique Petty-Ashmeade, 14 East

“We want to center people in our community who are being affected by systems that perpetuate harm, such as policing, settler colonialism, capitalism and so much more,” Tumalan said.

Creating this collective was difficult for Tumalan and Baron since they were students working part-time jobs. Vending fees are common for artists, but they’re not always affordable, so Tumalan’s goal was for vendors to sell without a fee holding them back. They paid out of pocket without making any profit, since they didn’t receive funding for events and wanted the vendors to sell for free. The two founders dedicated their nights to planning these events and they accepted the challenge of making it on their own.

“The name of the brand came to us quickly, I feel, we were both brown, both artists, and I think Brown Baby Art was a catchy and cute name,” Tumalan said.

Their first event, Brown Baby Bash, was held on July 15, 2021, and emotions ran high anticipating the outcome. They contemplated if their artists would make profit and if their community would come to support, but by the end nearly all of their artists sold out. Since then, they’ve collaborated with Northwestern University, Trans Chicago Empowerment Center and the American Friends Service Committee.

A diverse collection of art is for sale at the Spooky Art Market on October 22. Photos by Monique Petty-Ashmeade, 14 East

What inspired the team was realizing there weren’t a lot of accessible events that were directed for and by queer artists. Tumalan had never been in a space like the one he created himself and what’s important to him is the bond between artists.

“I love connecting to other artists, especially those to whom I can relate. For me, I think Brown Baby Art is about connecting, helping and keeping each other safe,” he said.

Tumalan incorporates his queer and Latino identity through his art. He believes his pieces are an extension of his voice so he likes them to be loud. His work and identity resist against systems that perpetuate harm to him and his community. Releasing these emotions in his art allows Tumalan to breathe unapologetically and express who he is.

“My trans identity is something that I try to uplift in my art,” Tumalan said. “Growing up I did not have that representation and I want to be able to be that example for younger queer folk who’ve shared similar experiences to mine.”

The art and the brand are very personal to Tumalan and Baron which is why their passion can be seen through their work. Tumalan was always a creator, but COVID-19 shifted him towards digital art which allows him to produce the work he does today. He realized how compelling his art was when producing graphics for the HANA Center, Raise Your Hand IL and for the CopsOutCPS campaign. He watched his work grow into political tools that could change narratives and mobilize communities. 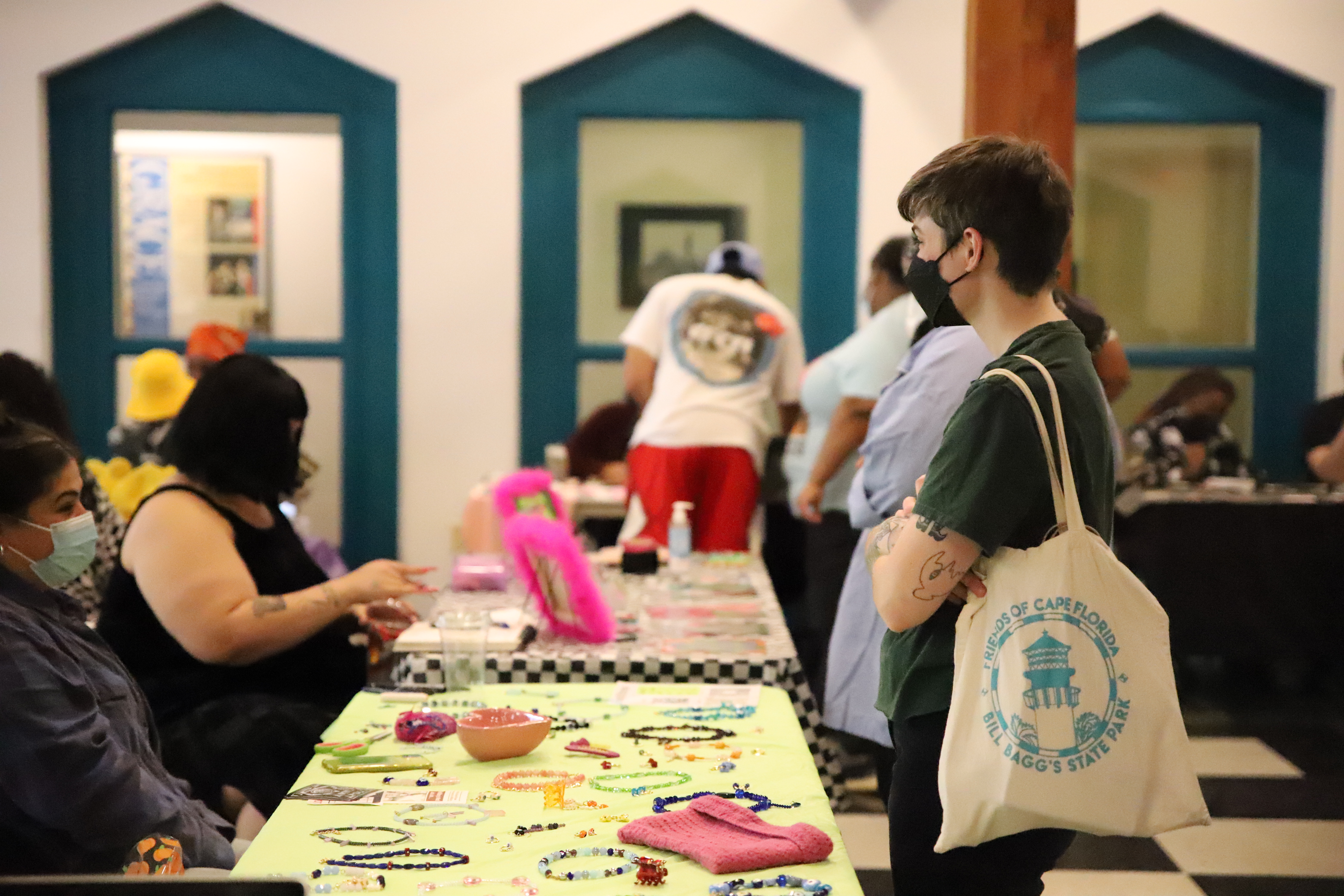 Visitors of the Spooky Art Market browse the artists’ displays. Tumalan said, “For me, I think Brown Baby Art is about connecting, helping, and keeping each other safe.” Photo by Monique Petty-Ashmeade, 14 East

Debbie Southorn, who works for The American Friends Service Committee, took part in co-hosting the Spooky Art Market. Their committee works towards ending policing and criminalization of Black and brown communities in Chicago. Southorn was excited to help Brown Baby Art since she believes art is a crucial part of social change.

“Young people have always been at the forefront of movements for racial justice, gender justice and social justice. We take seriously our role in making sure that young people in Chicago, who are already passionate about these issues, have spaces and have backup,” Southorn said.

Currently, Tumalan is working towards an intersection of cultures by producing a queer Loteria series. Loteria is a Mexican card game that is similar to bingo, but has characters representing Mexican culture on the cards. Tumalan is replacing those characters with topics like testosterone, estrogen and more to revolve the art around the transgender identity and the process of transitioning.

Head here to view the progression of queer Loteria and to keep up with Tumalan’s latest creations.