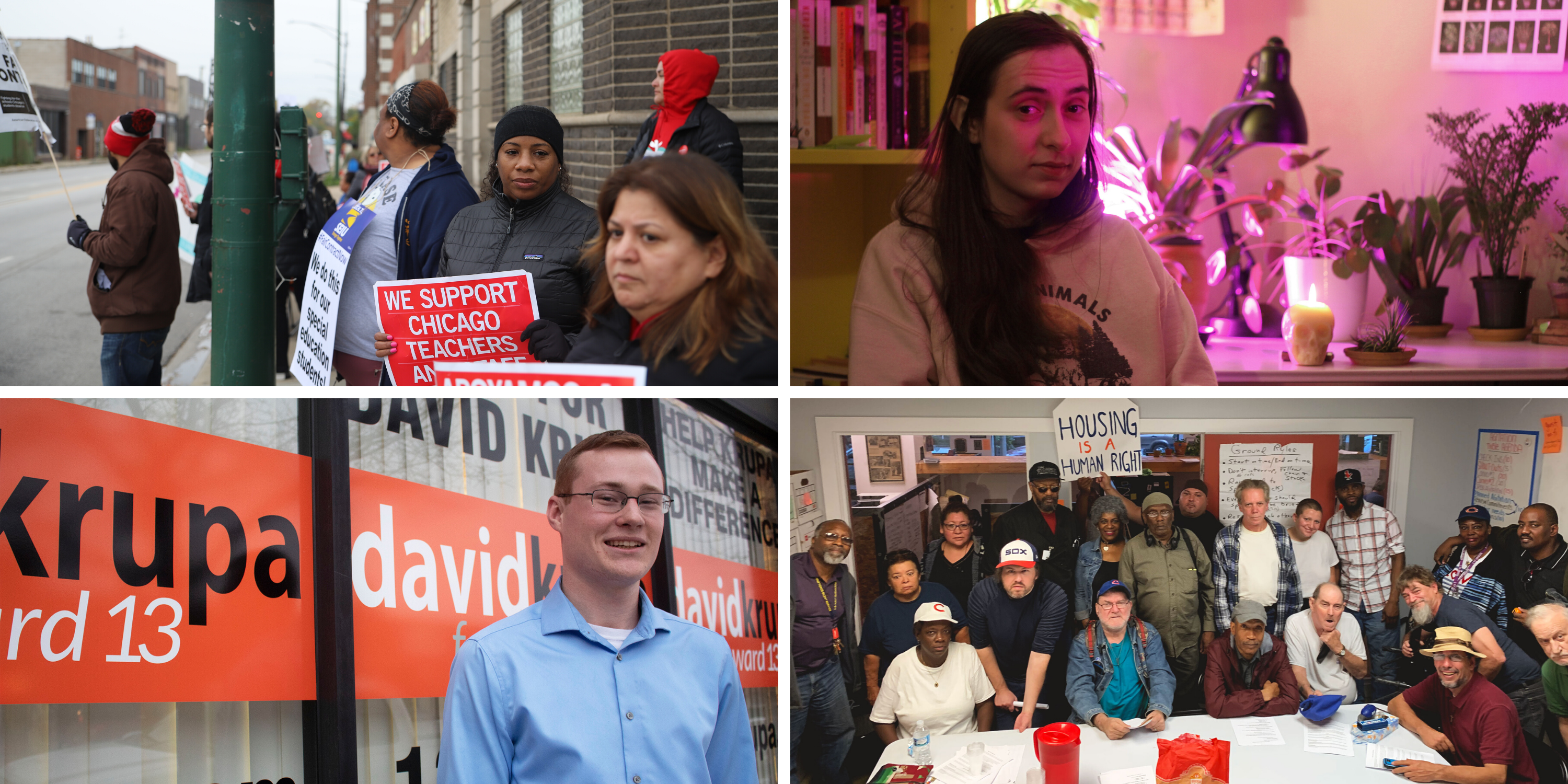 This month, we launched our first online fundraising campaign (which you can still donate to). As we prepared for it, we found ourselves reflecting on the work we did this year. In 2019, we hosted 14 events — including a live storytelling event and community feedback sessions, — received 21 awards and completed a 10-month-long, grant-funded Water Testing Project.

We also published 221 stories covering topics ranging from access to housing in Chicago, gentrification and environmental racism to the aldermanic election, Van Dyke verdict and protests following. We covered the 2019 Chicago Teachers Union strike, publishing daily, rather than weekly. We started a new music column, 14 Beats. And we received 21 awards — including 13 national and 8 regional. Seven of those won first place.

As we look back on the year and prepare for the one ahead, here are some of our favorite stories from 2019:

At the very least, Chicago politics is chaotic (though, one could argue so is politics in general). And somehow, DePaul often seems to be connected to said city political turmoil (hello, DePaul grad Ed Burke). This story explores just one aspect of DePaul’s many connections to political controversies. This was a collaboration between 14 East and Radio DePaul, so it’s both a podcast and a written story. I love how the podcast was broken into separate parts. The story complements the podcast well and answers many questions that come to mind when you hear a college freshman is running for alderman.

Having lived in Chicago my whole life and having been educated through CPS from kindergarten to high school, I have seen my fair share of Chicago Teachers Union strikes. But because of 14 East’s daily coverage of the CTU strike this year, I was able to learn from the teachers and staff themselves about the injustices they and the schools are still facing. I love that the coverage spanned different parts of the city and included rallies and sit-ins from students and teachers. I also loved the solidarity we saw in the daily stories among all the teachers, staff members and students. It truly showed that regardless of the neighborhood or school, everyone was fighting for the same thing. The stories were one of the most powerful things I’ve read all year, and I’m thankful I was able to contribute.

Affordable housing is a hot issue in Chicago, but few articles on the topic have as much depth as Patsy Newitt’s piece on single-room occupancy (SRO) hotels. The article not only reports on the present state of SROs in the city, but provides a detailed history including a beautiful timeline, on this essential form of low-income housing. In chronicling the uncertain fate of SRO housing and documenting the perspective of SRO residents, Newitt expertly puts numbers behind the experiences of people directly affected by a major decline in the availability of this form of low-income housing. Chicagoans on the verge of homelessness are often the most affected by affordable housing issues but continue to lack representation when decisions on the topic are made. In good articles, such as this piece, they voice the narrative.

Event Planner Justin Myers chose: 4 of the Best Places to Cry on Campus, Because We All Know You Do It

I have recommended this article more than any other article written for 14 East magazine. I applaud former 14 East editor-in-chief Madeline Happold’s raw honesty and brutal reality when it comes to an experience every college student has: crying. As an employee of DePaul’s Lincoln Park Student Center, I appreciate and endorse our inclusion on the list — its nooks, crannies and lounges very much deserve their place.

On a more serious note, I chose this article as my favorite for the year for the approach Happold took. Lighthearted and good humored under every entry, the article presents the topic as a valid emotional reaction to the stresses encountered by the average college student. In doing so, Happold presents the message that those with poor mental health days are not alone and encourages them to find the lighthearted silver lining even in the most challenging of times. The article contains a complexity and depth in journalistic writing that I greatly respect.

Associate Editor Patsy Newitt chose: Maybe this plant will fix everything for me

Rachel Sue Fernandez recounts her plant love affair in this piece we published last week. The story hits every single mark – vulnerable and thoughtful, while also providing tons of useful information about plants and their impact. She finds the perfect balance between informational and personal. The piece is accessible, heartwarming and makes you want to buy hundreds of plants.

It also has great pictures and illustrations of plants, a map of places to buy plants, a comprehensive list of books, websites and memes for plant owners, and 14 East’s first QUIZ that tells you which plant you should own. She creates this one-stop shop for all of your plant needs that works alongside her personal narrative.

Associate Editor Meredith Melland chose: Charlotte Russe: Saying Goodbye to the Retailer That Had it All

I was never a Charlotte Russe shopper, but Melody Mercado’s heartfelt farewell piece to the retailer made me wish I had been. In the story, Mercado returned to Charlotte Russe locations that helped her dress for all kinds of events and chronicles the going-out-of-business sale. In addition to opening up to readers about her sadness on the news and affection for the brand, Mercado interviewed shoppers and employees on the scene about how they felt. She included short audio clips of the interviews, allowing those affected to communicate their disappointment. The audio and Mercado’s description of the Charlotte Russe retail model — such as their great plus size section — really helped me understand the connections people made with the store.

In retrospect, the story has a happy ending. Charlotte Russe lives on, not only in the hearts of shoppers, but in 100 and counting locations that reopened after the brand was bought in April. But had Mercado not used her subjectivity and perspective to jump on the store closing when it happened and create a thorough and meaningful multimedia story, I might never have known about the magic of Charlotte Russe.